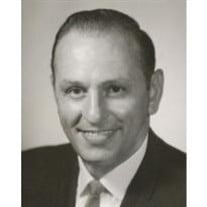 Zacharias E. Mandravelis, 85, of Nashua, NH, successful entrepreneur, generous philanthropist and devoted husband and father died on Monday, November 30, 2009 at Community Hospice House. Zack was born in Nashua, NH on January 25, 1924. He was the third of four sons of the late Evangelos and Fotini Mandravelis who emigrated to the US from Greece. He celebrated his 62nd wedding anniversary with his wife Pauline (Economou) on September 28th. Mr. Mandravelis was educated in the Nashua school system. Upon completion of his education in Nashua, Zack traveled to the Midwest to attend technical schools to study photoengraving, photography, image reproduction and machine tool technology. His academic pursuits laid the foundation for two businesses he started in Nashua. Zack enlisted in the Army during World War II. He served with the 143rd Armored Signal Corp in the Third Armored "Spearhead" Division. The Division landed on Omaha Beach during the invasion of France and Germany and later fought in the Battle of the Bulge through to the Elbe River. The war ended shortly after these battles. Zack was discharged with honors. In 1948, Mr. Mandravelis developed his first business, the Nashua Photo Engraving Co., the first and only one of its kind in Nashua, specializing in etched photo engravings for the printing industry. His wife Pauline worked with him from the start. In 1956, he established the Zax Corporation, also in Nashua, manufacturing engraved signage, informational directories and a diverse selection of innovative donor recognition products honoring benefactors who donated funds to churches, hospitals and institutions throughout the country. Many of the products and designs Mr. Mandravelis created became industry standards. Zack and his wife Pauline worked together in his business until it was sold in 2000. Mr. Mandravelis’ innate talent for creative design and gift for visualizing the potential of both interior and exterior spaces fueled his passion for architecture. He designed homes and landscaping both for his personal enjoyment and commercial ventures. In addition to designing his office buildings and manufacturing departments, he conceptualized and carried out numerous renovations and remodels of his own homes. He derived great pleasure and satisfaction by doing much of the work himself. He especially enjoyed carpentry and gardening projects. He was also very involved in real estate, having built several large industrial buildings in Nashua. His interest in land development extended to Florida where he worked diligently to lay the groundwork and design for the development of land for residential properties. In addition to business pursuits, Mr. Mandravelis cared deeply about his local community, especially the Greek Orthodox church, concerns of the chronically mentally disabled and children in need. He was a fifty year member of the fraternal organization, the Order of AHEPA chapter 35, serving as President in 1961. He also served as Chairman of the League of Greek Orthodox Stewards, initiating a drive in support of reaching the League's national goal of raising five hundred thousand dollars to aid Greek youth ministry programs and homes for Greek orphans. In the early 1970’s, Mr. Mandravelis agreed to do extensive research to develop a detailed proposal with the intent to merge Nashua's two Greek Churches, St. Nicholas and the Church of the Annunciation into one. In 1973, Mr. Mandravelis addressed the parishioners of both churches, obtaining almost unanimous approval from those present to merge the churches into one and construct a new church on undeveloped land on West Hollis Street. Mr. Mandravelis was chosen to chair the architectural committee to oversee the planning, development and building of the new church, Zack devoted himself tirelessly for two years to each phase of construction working vigilantly to monitor each decision. He and his committee worked closely to construct the new church according to the plan presented to the parishioners. The church was named St. Philip Greek Orthodox Church. Zack’s artistic talent and professional expertise in designing and creating the large Iconostasion Wall and the Royal Altar Gates mounted at the front of the church's sanctuary, remained one of his proudest lifetime accomplishments. Since his semi-retirement in 2000, Mr. Mandravelis has worked diligently at establishing charitable foundations with his wife, providing grants primarily for organizations working for mentally disabled individuals. He and his wife Pauline donated land in Nashua to Habitat for Humanity and a home was built on this land for a deserving family. Besides being a passionate businessman, compassionate and generous humanitarian, a skilled craftsman, builder and designer of both land and property, Zack also loved to travel with his wife. Through the years they made many trips to their ancestral homeland of Greece as well as to many other European countries, places in South America and Africa. For his love of snowskiing, he once traveled to the Swiss Alps for a guided skiing adventure. Zack was born loving the water. He was a lifetime swimmer, boater and ardent sailor. He enjoyed ocean sailing for years off the coasts of Massachusetts to Maine. Zack is survived by his wife, his daughter Faye and son William; two brothers, Christos of Rochester, NY and John of Nashua; he was predeceaced by his brother George "Mandy"; a sister-in-law, Mary (Economou) Panos of Manhasset, NY; a goddaughter, Gloria Mandravelis of Buffalo, NY; a godson, Charles “Chucky” Chouramanis of Nashua, NH; godson, Spiro Skinsakos of Lowell, MA; godson, Andrew Themeles of Westford, MA.; and several cousins, nieces and nephews. Visiting Hours will be held on Friday, December 4, 2009 from 10:00 am to 11:30 am at St. Philip Greek Orthodox Church, 500 West Hollis Street, Nashua, NH 03062. The funeral service will begin in the church at 11:30 am. Burial will follow at Woodlawn Cemetery in Nashua, NH.

The family of Zacharias E. Mandravelis created this Life Tributes page to make it easy to share your memories.