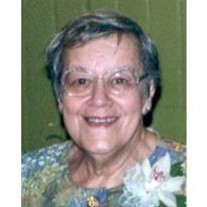 Yvonne Rosaria (Zullo) Aucella, 79, of Litchfield, NH, passed away after a long illness early Sunday morning, February 8, 2009 at St. Joseph’s Hospital in Nashua, NH. Yvonne was born on March 30, 1929 in Naples, Italy and was raised in Somerville, MA daughter of the late Giuseppe and Amelia (Natale) Zullo and was the loving wife for nearly 58 years of Albert P. Aucella, a long time resident of Malden, MA and now of Litchfield, NH. Yvonne was predeceased by two brothers; Dario Zullo and Wilbur Zullo. Yvonne graduated from Somerville High School and spent two years at Boston University. She then became a bond teller at Shawmut Bank in Somerville. She went on to devote much of her life to raising her three boys, offering them love, support, and the space for each to find their own different personalities and different routes in life. In the decades when her husband owned Aucella Drug pharmacy in Malden, MA, she assisted him in the store, and was often seen rushing back and forth between the pharmacy and the house right next store—cooking pasta and taking care of the boys on one end, bringing meals, ordering greeting cards and helping customers on the other. She enjoyed not only her family but neighbors and especially children. She was an accomplished seamstress, often making her own clothes and generously repairing the clothing of anyone who asked, or for whom she saw a need. She also enjoyed knitting and crocheting. Her warm, loving, and generous, not to mention candid, nature made her a popular figure wherever she lived, and wherever she went. Besides her loving husband Yvonne is survived by her three sons; Peter Aucella and his wife Rosemary of Lowell, MA, Richard Aucella and his wife Linda of Londonderry, NH, and Albert Aucella and his wife Jessyca Broekman of Falmouth ME. A brother; Aldo Zullo and his wife Emma of Nashua NH. Three grandchildren; Adriana, Keith, and Judea. Six nieces and nephews; Leslie, Lindsay, Gary, Robert, John, and Linda and many Friends. Visiting hours will be held on Wed. Feb. 11th from 6-8pm in the DUMONT-SULLIVAN FUNERAL HOME, 50 FERRY ST., HUDSON. A Funeral Mass will be held on Thursday Feb. 12th at 10am in Saint Francis of Assisi Church, 9 St. Francis Way, Litchfield. All To Meet At Church. Burial will be in Holy Cross Cemetery, Hudson, NH.

The family of Yvonne R. (Zullo) Aucella created this Life Tributes page to make it easy to share your memories.