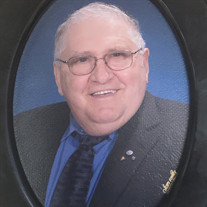 Yves E. Tardif, 70, of Litchfield, NH, died Friday March 22, 2019 at home surrounded by his loving family. Yves was born on August 8, 1948 in St. Victor, Beauce, Canada. He was the son of the late Fernando and Madeleine (Doyon) Tardif. Yves came to the United States in 1963 where he later proudly became a U.S. citizen. He was a union carpenter with Local 40 and a lifelong member of the Knights of Columbus. Yves enjoyed camping with his wife France. He looked forward to visiting the fair with his family to watch the tractor and horse pulls. He also enjoyed going to Pittsburg with his brothers where he would play cards, ride four-wheelers and snowmobiles. Cutting and stacking wood for the winter was another annual activity. Other activities he enjoyed were visiting his family in Canada and vacationing in various locations. The thing that brought him the most joy was his grandchildren, especially when he gave them rides on his golf cart. The holidays were something he especially got excited about, making Christmas cookies, eating more icing then he put on the cookies! Easter was fun decorating eggs and hiding them for his grandchildren. He was a generous person, always there when someone needed a hand. Yves is survived by his loving wife of 48 years, France (Pomerleau) and his two sons; Richard and Deanna (Clinton) and Daniel and Rae (Slattery) both of Hudson, NH; five grandchildren, Kirsten, Noah, Chloe, Mia and Ava; nine siblings Liette (Andre Toulouse), Jeanne (Louis Michaud), Yvan (Chantal Rodrigue), Mariette (Roger Bureau), Armand, Martine (Yvan Tardif), Lucille (Herman Drouin), Ghyslaine (Gilles Pomerleau), Sylvain (Lynda Pomerleau), many in-laws and nephews and nieces. He was pre-deceased by six siblings Suzanne, Clermont, Isabelle, Laurent, Paul, Gerard. The family would like to thank Amedisys Hospice and the Alzheimer’s Association for their help and support. In lieu of flowers, donations can be made to ALZ.org.

Yves E. Tardif, 70, of Litchfield, NH, died Friday March 22, 2019 at home surrounded by his loving family. Yves was born on August 8, 1948 in St. Victor, Beauce, Canada. He was the son of the late Fernando and Madeleine (Doyon) Tardif. Yves... View Obituary & Service Information

The family of Yves Tardif created this Life Tributes page to make it easy to share your memories.