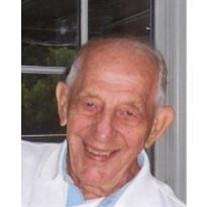 William V. Boudreau, 90 of Nashua, died Wednesday September 21, 2011 at his residence surrounded by his loving family. William was born March 23, 1921 to the late Bertha (Martel) and William X. Boudreau in Winthrop, MA. He graduated from Revere High School in 1939 where he was an All Scholastic first baseman and part of the Naval Reserve. He was then selected to work out with the Boston Red Sox until 1941 when he was called into active duty in the Navy. Bill served in the Pacific theater where he was part of a mobile communication unit attached to General MacArthur. After World War II, Bill played in the Brooklyn Dodgers Organization for five years with greats like Don Zimmer and Tommy Lasorda. The communication skills he learned from the Navy helped him start his career as an Air Traffic Controller with the Federal Aviation Administration. He first worked at Logan International Airport while living in Beachmont, MA then the Air Traffic Control Center in Nashua, NH after moving there in 1963. He retired in 1981, having spent 33 years of his life in service to the United States of America. His family life began in November 1954 when he married Florence Nicolini of Beachmont, MA. They had six children together: Robert, Susan, Nancy, Jacqueline, Carol and Laurie. Even though his baseball career had ended, he played in a softball league in Winthrop then in Nashua, winning the city title in 1965. Bill was part of a FAA hockey team that traveled to Canada for a tournament every year and golfed in the FAA and Ponemah Senior league up until last year. His passion for baseball and golf extended to the perfectly manicured grass that he imitated in his own lawn while he flooded the backyard every winter to teach his children how to skate. He took pride in his landscaping, especially the geraniums, impatients and buttercups and looked forward to meeting his many friends for coffee almost every day. Bill and his family spent every summer at a cottage on Balch Lake in NH swimming and waterskiing with the entire extended family. Always ready with a story for every occasion, Bill was famous for his quick wit and great sense of humor. His humility, commitment to family, practicality, strong work ethic, positivity, active lifestyle and faithfulness inspired all who knew him. William was the beloved husband of Florence (Nicolini) Boudreau of Nashua with whom she shared 57 years of marriage. Besides his loving wife Florence, survivors include one son Robert Boudreau and his wife Dana of Amherst, NH and their children Blake and Caroline, five daughters Susan Croteau and her husband John of Pepperell, MA and their children Jaime, Nicholas, and Alexandra, Nancy Palmer and her husband Larry of Concord, MA and their children Wesley, Mitchell, and William, Jackie Kelly and her husband Ed of Milford, NH and their children Andrew and Grace, Carol Croteau and her husband David of Nashua and their children Timothy, Julia, and Austin and Laurie Boudreau of Nashua. He is also survived by a dear sister Lorraine Hegenberger of Hanover, MA and many loving nieces and nephews. Visiting hours will be held on Sunday September 25th from 3pm-7pm in THE DUMONT-SULLIVAN FUNERAL HOME, 50 FERRY ST. IN HUDSON. A Funeral Mass will be celebrated on Monday September 26th at 10:30am in Blessed John the XXIII Parish at Infant Jesus church, 121 Allds St. in Nashua. ALL MAY MEET AT CHURCH. Burial will be in Edgewood Cemetery in Nashua. In lieu of flowers the family encourages donations be made in William’s loving memory to the Bishop Guertin High School, 194 Lund Rd., Nashua, NH 03060.

William V. Boudreau, 90 of Nashua, died Wednesday September 21, 2011 at his residence surrounded by his loving family. William was born March 23, 1921 to the late Bertha (Martel) and William X. Boudreau in Winthrop, MA. He graduated from Revere... View Obituary & Service Information

The family of William V. Boudreau created this Life Tributes page to make it easy to share your memories.