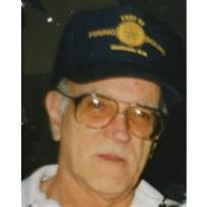 William “Bill” Mitchell, 71 of Litchfield, passed away Thursday, September 10, 2009 at St. Joseph Hospital in Nashua with his wife Leslie and twin sister Esther at his side. He was born Dec. 3, 1937 in Nashua, son of the late Nicholas and Pearl (D’Amour) Mitchell. He was also predeceased by a daughter, Nikki Mitchell and a brother, Peter Mitchell, as well as by his beloved dogs; Bear and Mocha. Bill was the husband of Leslie (Buirch) Mitchell of Litchfield. He was a graduate of Alvirne High School, Class of 1956. Prior to his retirement, Bill had been employed with RDF Corp., Sanders Assoc., and Continental Homes. He was a Past Commander of the American Legion Post 48 Hudson and a member of their firing squad. He was also a member of a local snowmobiling club. Among his many interests were camping, cane carving, crossword puzzles, and most of all spending time with his family. He was a NASCAR enthusiast who loved Dale Earnhardt. Besides his loving wife Leslie, survivors include two daughters and a son in law; Sabrina Mitchell of Litchfield, Tricia and Dean MacKinnon of Milford. His twin sister; Esther Levesque of Hudson. Two brothers and two sisters in law; Larry and Winnie Mitchell and John and Rita Mitchell all of Hudson. As well as 3 grandchildren and several nieces, nephews, and cousins. Visiting Hours will be on Tues. Sept. 15th from 3-6pm in the DUMONT-SULLIVAN FUNERAL HOME, 50 FERRY ST. IN HUDSON. A Prayer Service will take place on Wed. Sept. 16th at 9am in the Funeral Home. All may meet at 8:45am. A military burial will be in St. Patrick Cemetery, Hudson. In lieu of flowers the family requests donations be made in Bill’s loving memory to the Alzheimer's Association, One Bedford Farms Drive, Suite 105, Bedford, NH 03110.

William “Bill” Mitchell, 71 of Litchfield, passed away Thursday, September 10, 2009 at St. Joseph Hospital in Nashua with his wife Leslie and twin sister Esther at his side. He was born Dec. 3, 1937 in Nashua, son of the late Nicholas and... View Obituary & Service Information

The family of William P. Mitchell created this Life Tributes page to make it easy to share your memories.