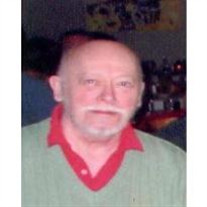 William “Carl” Goose, 78, of Hudson, NH died Mon. July 14, 2008 at the Southern NH Medical Center in Nashua. He was born Dec. 6, 1929 in Louisville, KY son of the late John W. and Essell (Hoffman) Goose. Carl was a Korean War Veteran, having served in the U.S. Marine Corps. He received a degree from the University of Louisville and loved poetry and classical music. Carl was very proud of his family history; especially his Uncle, Roscoe Goose, the wining jockey of the 1913 Kentucky Derby. He will be remembered for his great sense of humor and for never complaining about anything. Survivors include one son and a daughter in law; David and Angelina Goose of Debarry, FL. Three daughters and a son in law; Jamie Fish of Debarry, FL, Mary Goose of Billerica, MA, Bernadette “De-Dee” and Ray Brasil of Hudson, with whom he resided. Four grandchildren; Lauren Goose, Jennifer Fish, and Ryan Fish all of Debarry, FL, and Cody Goose-Anderson of Hudson. Two great grandchildren; Rosalyn Brasil of Temple, NH and Demetri Brasil of New Boston, NH. A sister; Catherine Shea and his twin sister; Donna Warren both of Louisville, KY. His dear friend; Tina Goose of Billerica, MA. Two beloved dogs that he considered “his other kids”; Skippy and Jack. Also several nieces, nephews, great nieces and nephews and great great nieces and nephews. Visiting Hours will be on Sat. July 19th from 1-3pm with a Prayer Service at 2pm in the DUMONT-SULLIVAN FUNERAL HOME, 50 FERRY ST. IN HUDSON, NH. A Funeral Mass will take place of Fri. July 25th at 10am in Prince of Peace Church, East 2nd St., Madison, Indiana with burial in the Indiana Veterans Memorial Cemetery. In lieu of flowers the family requests donations be made to the Humane Society for Greater Nashua, 24 Ferry Rd., Nashua, NH 03064.

The family of William "Carl" Goose created this Life Tributes page to make it easy to share your memories.