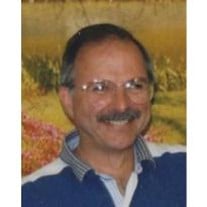 William C. Mallard, Jr., 61 of Nashua, NH died Thursday, September 16, 2010 at the Community Hospice House in Merrimack, surrounded by his loving family. He was born December 9, 1948 in Salem, MA son of the late William Sr., and Laurette (Martineau) Mallard. Bill was the husband of Janet (Daigle) Mallard of Nashua with whom he shared 35 years of marriage. He was a Graduate of Merrimack College, Class of 1974, where he received his BSEE Degree and later earned his MSCS Degree from Northeastern University in 1982. Bill was an electrical engineer who was employed with Motorola’s Quantum Bridge Communications Division for more than 10 years. While there, he was promoted to Distinguished Member of the Technical Staff. He was a true tinkerer, always playing with his computer, and HAM radio and was known by his family as “Captain Fix It.” He enjoyed listening to Jazz and playing his drums. His greatest joy came when spending time with his family. Besides his loving wife Janet, survivors include a daughter, Jennifer Mallard of Waltham, MA; a son, Timothy Mallard of Northborough, MA; two sisters and a brother in law, Janice Mallard of Beverly, MA , Donna and Dale Pierson of St. Mary’s Point, MN; as well as many nieces. Visiting Hours will be held on Mon. Sept. 20th from 4pm – 7pm in the DUMONT-SULLIVAN FUNERAL HOME, 50 FERRY ST. (Rte 111) HUDSON, NH. A Funeral Mass will be celebrated on Tues. Sept. 21st at 10:30am at St. John Neumann Church, 708 Milford Rd., Merrimack, NH. ALL MAY MEET AT CHURCH. Burial will be in Edgewood Cemetery in Nashua. In lieu of flowers the family encourages donations to the Dana Farber Cancer Institute, 10 Brookline Place West, 6th floor, Brookline, MA 02445-7226 ATTN: Contribution Services. www.dana-farber.org/how/gifts/

The family of William C. Mallard, Jr. created this Life Tributes page to make it easy to share your memories.