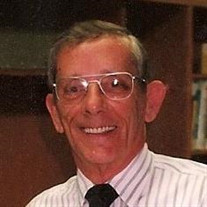 William E. Reid Jr. (Bill), 86, of Hudson, NH passed away on Wednesday March 8, 2017 at the Southern New Hampshire Medical Center in Nashua, NH surrounded by loving family. Bill was born on August 15, 1930 in Boston, MA son of the late William and Victoria (Quartrelli) Reed [sic] and was also predeceased by his wife Helen Reid (2015) and a son, William E. Reid III (2000). Bill retired in 2001 from the Hanscom Air Force Base, after 53 years of working for the goverment including his years in the Navy where he fought in the Korean War. Bill was proud of his accomplishments, he enjoyed his work, and treasured his family. He once stated that he was the most grateful for the life that he has lived. His advice was to never settle for less and always work hard to succeed in life, just as he can proudly say he did. He will be missed by all of those who had the privilege of knowing him. Bill is survived by three daughters, Diane McFarland of Griswold, CT, Ann Marie Wilde of Hudson, NH and Patricia Shiner of Raymond, NH; seven grandchildren, Melissa McFarland, Jennifer Pappa, Lynette Cote, Logan, Ann Marie, Julia and Rachel Wilde; six great-grandchildren, Jacob and Alexis Baton, Andrew and Gabriel Pappa, Carley Reid, Wyatt Cote; several nieces, nephews and many dear friends. Visiting hours will be held on Thursday, March 16th 10am - 12pm in the Dumont-Sullivan Funeral Home, 50 Ferry St., Hudson. Burial will directly follow at St. Louis Cemetery, Nashua. In lieu of flowers, donations may be made to Shriner Hospital for Crippled Children.

The family of William E. Reid Jr. (Bill) created this Life Tributes page to make it easy to share your memories.