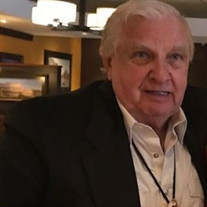 William “Billy” J. Gobbi, 78, of Litchfield, NH, the patriarch of the family, passed away at home with his family by his side on December 28, 2021 after a long illness. He was born on January, 31, 1943, in Boston, MA, son of the late Raymond & Ruth V Gobbi. Billy was a devoted employee of Perkins School for the Blind as a Custodial Engineer for 30 years until his retirement in September 2020.   Billy was raised in Waltham, known as the Cadillac Kid, where he enjoyed roller skating at the Wal-Lex, car racing, and raising his family, until he moved to Litchfield, NH in 1992. Throughout his life he loved restoring and working on classic cars. He was a master mechanic, a trade he learned at an early age working in his father's garage in Watertown, MA. His favorite cars were Cadillacs, Lincolns, and particularly 1958 Buick Limited Convertible and 1959 Cadillac. You would always find Billy working under a hood of a vehicle as he loved helping fix neighbor's cars. He was an avid organ player and would entertain his family for hours. He also enjoyed listening to oldies and country music. He spent countless hours and took great pride in raking, mowing, and shoveling his yard. Aside from his many hobbies he was known for giving great advice, providing words of wisdom, being a teacher and mentor, and he was quite the 'family jokester.' He loved to have fun and have a good laugh, but most of all he was a fun-loving husband and father. He enjoyed spending time at family get-togethers and was always the last guest to leave with the long "Gobbi Good-bye." He is survived by his beloved wife Barbara (Beck) Gobbi of 59 years. They were high school sweethearts, married at a young age and together they built a legacy. He was the proud father of three daughters Nina (Anita) Tobin and husband James, Denine Applebee and husband Mark, and Renee Myrdek and husband Lance; Seven grandchildren Derek Myrdek and wife Melissa, Lindsay (Myrdek) Goyette and husband Dennis, Melissa Tobin, Jeffrey Applebee, Natalie Applebee, Savannah Tobin, and Justin Applebee; Two great grandchildren Logan Goyette and Danielle Myrdek, and his dearest pet cat, Tony the Tiger. He leaves behind his siblings; Raymond, Richard, John, Ruth and the late Fredrick Gobbi and many nieces and nephews. He will be missed dearly by all who had the pleasure of knowing him.  All services will be private, per his request. Those wishing to make a donation in Billy’s loving memory in lieu of flowers are asked to consider The Perkins School for the Blind at www.perkins.org.  This charity was very dear to him and he would be happy to know that he is still able to be helping others.

The family of William "Billy" Gobbi created this Life Tributes page to make it easy to share your memories.