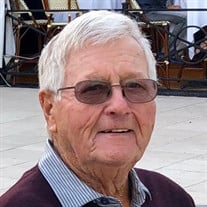 William R. Lochhead passed away peacefully at the age of 84 on Thursday morning, September 24, 2020, surrounded by his loving family. Born in Manchester on March 13, 1936, Bill was the son of William C. and Leona (Comire) Lochhead. He graduated from Nashua High School and was a proud alum of the University of New Hampshire, Class of 1961. Following college, Bill served his country in the US Army stationed at Ft. Knox, Kentucky and in Germany. He was President of Lochhead Millwork in Nashua working alongside his father and brothers until his retirement. Bill was an accomplished golfer. He was Captain of the UNH golf team, winning the NH Amateur Open and qualifying to play in the 1961 NCAA golf championship. He was later inducted into the UNH Hall of Fame. Bill “tee-ed it up” for over 60 years as a member of the Nashua Country Club where he won three club championships and three Nashua City Championships. He was a past President of the New Hampshire Golf Association and an active member of the McDonough Caddie Scholarship Program. Shortly after his graduation from UNH, Bill married Nancy (Hobbs) and they made their home in Nashua where they raised their children, Jay and Susan. Bill and Nancy loved entertaining and hosting family and friends for parties and lavish holiday meals. The laughter, music, and fun continued on the water during summers up on Newfound Lake and at their winter home in Fort Myers, Florida. “Sweet William” and “Fancy Nancy” knew how to have a good time together and included everyone in the fun. After Nancy’s untimely passing in 1993, Bill was blessed to find a second chapter in life when he met and married his wife, Patricia Heisner, in 2000. Together, Pat and Bill created a wonderful home together in Amherst where they welcomed their family and friends with warm hospitality and Pat’s delicious cooking. They enjoyed weekend getaways and many special years of caring for each other. Bill is survived by his wife of 20 years, Patricia (Heisner) Lochhead of Amherst, NH; his son Jay Lochhead and his partner, Elizabeth Larson, of Dana Point, CA; his daughter Susan Yardley and her husband, Matthew, of Hollis, NH; his adoring grandchildren, Quinn and Meredith Yardley. He also leaves his brothers, Henry Lochhead, and his wife, Anita; Roger Lochhead, and his wife, Paula; his sisters-in-law, Kathleen Lochhead and Susan “Kiki” (Hobbs) Collins, and several nieces and nephews. Bill was predeceased by his first wife, Nancy (Hobbs) Lochhead, his brother, Thomas Lochhead, and his beloved niece, Laura Gabriel. A Mass of Christian Burial will be held on Tuesday, September 29th at 10:00am in Immaculate Conception Church, 216 East Dunstable Road in Nashua. All family and friends are asked to please meet at church. Those attending are asked to please wear a mask or facial covering and to abide by the social distancing guidelines set in place by the church. Due to social distancing limitations on seating, the Mass will be live streamed and may be found on the Immaculate Conception Church website at www.iccnashuanh.org Burial will take place in Edgewood Cemetery in Nashua. In lieu of flowers the family encourages donations be made in Bill’s loving memory to either the McDonough Caddie Board Scholarship at www.mcdonoughgolf.com or The University of New Hampshire Athletics-Wildcat Fund at www.unhwildcats.com

William R. Lochhead passed away peacefully at the age of 84 on Thursday morning, September 24, 2020, surrounded by his loving family. Born in Manchester on March 13, 1936, Bill was the son of William C. and Leona (Comire) Lochhead. He graduated... View Obituary & Service Information

The family of William "Bill" Lochhead created this Life Tributes page to make it easy to share your memories.

William R. Lochhead passed away peacefully at the age of 84 on...