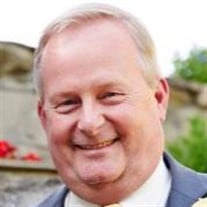 Walter G. Whelan, 60, of Nashua, died Monday April 11th at St. Joseph’s Hospital following sudden complications from recently diagnosed pancreatic cancer. A loving and devoted husband and father, Walter leaves behind the love of his life, Linda, son, Sean of Nashua, and son, Brian and his wife Whitney, of Merrimack. He also leaves his sisters, Phyllis and her husband Charlie Day of Falmouth, Kathleen Whelan of Quincy, a brother, Thomas Whelan, of New Hampshire, and two nephews and nieces. He was born in Boston, MA on June 16, 1955 son of the late Thomas J., Jr. and Doris (Richards) Whelan and and was also predeceased by his sister, Peggy, and his in-laws, Leonard and Mary Smith.   Walter lived in the Boston area until 1980 when he moved to New Hampshire with his young family. Walter was a graduate of Boston College High School, Class of 1973, St. Michael’s College, Class of 1977, and an MBA graduate of New Hampshire College. He spent over 30 years in the finance industry and was most recently employed at Heilind Electronics in Wilmington, MA. Like a true Bostonian, Walter took his politics and sports seriously. He was involved in youth leagues and idolized local legends like Carl Yastremski and Bobby Orr. As a young man, Walter took up golf and was a founding member of Sky Meadow Country Club in Nashua, NH. His passion for the sport brought him many opportunities to visit iconic courses across the globe. Visiting Hours will be held on Thursday April 14th from 4-7pm at the DUMONT-SULLIVAN FUNERAL HOME, 50 FERRY ST., HUDSON, NH with a funeral mass being celebrated in St. Katheryn’s Church, 4 Dracut Rd., Hudson the following morning beginning at 10am. All To Meet At Church. In lieu of flowers, the family has requested that donations in Walter’s name be made to the Paralyzed Veterans of America Organization at their processing center: 7 Mill Brook Rd in Wilton NH 03086.

The family of Walter G. Whelan created this Life Tributes page to make it easy to share your memories.