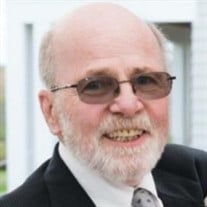 Walter “Wally” Cardinal, 71, of Hudson, NH died January 10, 2021 after a short hospitalization due to complications from a brain aneurysm suffered on December 27, 2020.   Born in Boston (Brighton), MA on June 25, 1949, he was the third son of Russell and Mary (Cloherty) Cardinal. He graduated from Watertown High School in 1967. After graduation, he enlisted in the US Air Force in 1971 and served in the Vietnam War on board a C-141 as a load master.  He was honorably discharged as a Staff Sergeant in 1975.  After leaving the Air Force, Wally was employed by Federal Express (FedEx) for 35 years as a courier and dispatcher. Wally enjoyed spending time with his family, especially his grandchildren, and friends, and was an avid fan of all the Boston sports teams. He is survived by his loving wife, Karen M. (Brown) Cardinal, with whom he shared more than 51 years of marriage. Family members include his son, Walter Cardinal, Jr. and wife Jennifer of Litchfield, NH; his daughter, Jenifer A. Kelly of Cortlandt Manor, NY; grandchildren, Ryan and his wife Kayleigh, Alexandria, Kaleah, Patrick, Colin and Walter III(Trey); and great grandson, Robert James (RJ). He was predeceased by his brother Peter Cardinal and leaves behind his sister, Ann Marie Mastalerz of Derry and four brothers, Paul Cardinal of Nashua, John and his wife Maureen Cardinal of Narraganset, RI, Kevin Cardinal of Derry and Russell Cardinal of Florida. He also leaves behind several cousins, nieces and nephews.  A Walk Through Visitation will be held on Sunday, January 17th from 2pm - 4pm in the Dumont Sullivan Funeral Home, 50 Ferry St. in Hudson, NH. Burial will be private. All those attending are asked to please wear a face mask or facial covering as well as to follow the social distancing guidelines in place.

The family of Walter Cardinal Sr. created this Life Tributes page to make it easy to share your memories.