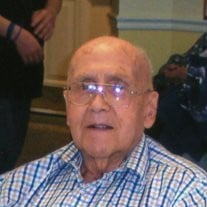 Wallace A. Magnin, 95 of Milford and long time resident of Nashua died Thursday, March 14, 2013 at Crestwood Healthcare Facility in Milford. He was born November 10, 1917 in Fitchburg, MA son of the late Leon, Sr., and Blanche (Hebert) Magnin. Wallace was also predeceased by his wife, Frances (Heon) Magnin as well as by two brothers, Leon Magnin, Jr. and Henry Magnin and a sister, Lorraine Charest. Wallace was a Veteran of WWII, Korea, and Vietnam having honorably served his country for 30 years in the Army Air Corps and later the United States Air Force. He continued that type of dedication by becoming a US postal carrier in Nashua, employed for 20 years until his retirement in 1991. He was an avid coin and stamp collector and loved photography. Wallace was also a member of the Coffey Post #3 American Legion in Nashua as well as the VFW Post 483 in Nashua. Wallace’s family includes a son, Peter Magnin and his significant other Lisa O’Keefe of Merrimack, three daughters, Suzanne Christie and her husband William of Gilmanton, NH, Paulette Combs and her significant other David Correa of Nashua, Michelle Degrandpre and her husband Roy of Amherst, NH, a brother, Russell Magnin of MA, 14 grandchildren, 13 great grandchildren, 1 great great grandchild, as well as many nieces, nephews, and cousins. Visiting Hours will be held on Sunday, March 17th from 4pm-6pm in THE DUMONT-SULLIVAN FUNERAL HOME, 50 FERRY ST. IN HUDSON. A funeral mass will be held on Monday March 18th at 11am in Blessed John XXIII Parish at Infant Jesus Church, 121 Allds St., Nashua NH. ALL MAY MEET AT CHURCH. Burial will be in St. Louis Cemetery in Nashua.

The family of Wallace Magnin created this Life Tributes page to make it easy to share your memories.

Wallace A. Magnin, 95 of Milford and long time resident of Nashua...