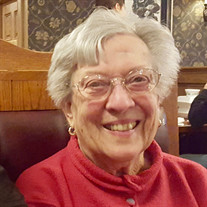 Virginia “Ginny” Reilly, 88, of Nashua, died peacefully surrounded by her loving family on Thursday, May 17, 2018. She was born February 22, 1930 in Wellesley, MA, daughter of the late Edward and Nancy (Morris) McCabe. Ginny was predeceased by her husband, George Reilly in October of 1981. Ginny was employed for several years with the Quincy MA School Dept. as a Teachers Aid. She later worked for Jenny Oil, where she enjoyed being an operator and later joined Sanders Associates. She loved golfing, traveling, and most of all spending time with family and friends. Ginny’s loving family includes a son, Edward J. “Ted” Reilly and his wife Dominique of Nashua, a grandson, Edward J. “EJ” Reilly of Nashua, two sisters, Margaret “Peggy” Murphy of Scitaute, MA, Constance “Connie” McClellan of Cape Cod, MA., as well a three nephews, Sean Murphy, Kevin Murphy, and Terry Murphy, and one niece, Meg Murphy. Visiting hours will be held on Tuesday, May 22nd from 4pm - 6pm in the DUMONT-SULLIVAN FUNERAL HOME, 50 FERRY ST. IN HUDSON. A prayer service will follow and begin at 6pm in the funeral home. A private burial will be held in Pine Hill Cemetery in Quincy, MA. In lieu of flowers the family encourages donations be made in Ginny’s loving memory to the Alzheimer’s Association, PO Box 96011, Washington, DC, 20090 or online at ALZ.org.

The family of Virginia "Ginny" Reilly created this Life Tributes page to make it easy to share your memories.