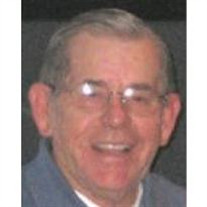 Victor Beauregard, 76, of Nashua, NH, passed away after a courageous battle with cancer on Thursday, July 9, 2009, at the Community Hospice House in Merrimack, NH. He was surrounded by his loving family. Born on April 9, 1933 in Nashua, NH, he was the son of the late Victor and Antoinette (Lukash) Beauregard. Victor was part of the first graduating class from Alvirne High School, Hudson, NH, in 1951. Shortly after graduating, he joined the United States Air Force, honorably serving his country during the Korean War. During his military years, he was stationed in Niagara Falls, NY, where he met his beautiful bride Nicoletta (Ricci). They were married on April 7, 1956 and shared more than 53 years of marriage. Their love and commitment to each other personified the true meaning of marriage for which their children so admire. Victor went on to receive his Bachelors Degree from Daniel Webster College in Nashua, NH and had a long career with the Federal Aviation Administration. He retired in 1988 after 35 years of government service. Post retirement, he was employed by Friel Golf Management and worked at a number of the local golf courses including Whip-Poor-Will Golf course in Hudson, NH and Souhegan Woods Golf Course in Amherst, NH. Not surprisingly, one of Victor’s favorite pass times was playing golf. He was an avid golfer and loved the sport. One of his greatest joys was his annual family Father’s Day golf tournament that his entire family participated in. Victor was also an accomplished ten pin bowler. He coached junior bowling for 20 years and was inducted into the NH State Bowling Association Hall of Fame in 1986. Victor was the true patriarch of the Beauregard family. He was a devoted husband to his wife and father to his six surviving children; Sharon Dailey, Sandra Romkey, Susan Zylak, Sheila Soucy, Steven Beauregard and Stacie Hicks. He had an innate ability to strike up a conversation with everyone he met and developed many long lasting friendships over the years. Besides his wife and children, Victor is survived by a brother, Ernest Beauregard, Huntsville, AL; three son-in-laws, Richard Zylak, Norman Soucy and David Romkey; one daughter-in-law, Pamela (Laytart) Beauregard; fourteen grandchildren, Eric Dailey and his wife Melissa, Erin Dailey, Michelle (Lavigne) Kelley and her husband Michael, Mathew Lavigne, Michael Zylak, Jamie (Zylak) Josephs and her husband Jonathan, Morgan Soucy, Anthony Laytart, Charity Laytart, Chantel Beauregard, Natalie Beauregard, Brandon Hartford, Tyler Hartford and Aulbani Beauregard; five great-grandchildren, Tyla Westcott Kelley, Connor Kelley, Ryhan Kelley, Carver Lavigne, Maleki Rivera, and several nieces and nephews. Victor’s presence is profoundly strong and will give his family the strength they need to go on. He will forever remain in their hearts and will live on through each of them. Visiting Hours will be held on Mon. July 13th from 5-8pm in the DUMONT-SULLIVAN FUNERAL HOME, 50 FERRY ST., HUDSON. A Funeral Mass will be celebrated on Tues. July 14th at 10am in the Immaculate Conception Church, 216 East Dunstable Rd., Nashua. All To Meet At Church. Burial will be in Holy Cross Cemetery, Hudson.

Victor Beauregard, 76, of Nashua, NH, passed away after a courageous battle with cancer on Thursday, July 9, 2009, at the Community Hospice House in Merrimack, NH. He was surrounded by his loving family. Born on April 9, 1933 in Nashua,... View Obituary & Service Information

The family of Victor Beauregaurd created this Life Tributes page to make it easy to share your memories.

Victor Beauregard, 76, of Nashua, NH, passed away after a courageous...