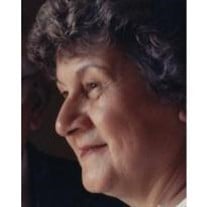 Veronica O. (Kunze) Lyons, 82, of Nashua, NH died Wednesday March 28, 2012 at the Community Hospice House in Merrimack, NH surrounded by her loving family. Veronica was born on December 27, 1929 daughter of the late Paul V. and Emma (Schroeder) Kunze and was the loving wife of Walter J. Lyons (1992). Veronica had a caring spirit and nature about her and was loved by so many. She enjoyed arts and crafts, bowling and bunko. She will be missed by all that knew her. Veronica is survived by three sons, Tim Robinson of Nashua, NH, Eric Robinson and his wife Nanette of Nashua, NH and Tom Robinson of Nashua, NH and his fiancé Sherrie Raymond of Merrimack, NH; two daughters, Marcia Robinson of Nashua, NH and Gayle Desautels and her husband Dan of Raymond, NH; two brothers, Paul Kunze and his wife Jean of Billerica, MA and Walter Kunze of Tewksbury, MA; a sister, Anne Evans of TN; six grandchildren, Tim, Nicole, Ericka, Kelsey, Ryan, Hannah; a great granddaughter, Isabelle and many more family and friends Visiting Hours will be held on Friday March 30th from 4-7pm in the DUMONT-SULLIVAN FUNERAL HOME, 50 FERRY ST., HUDSON. Burial to be at a later date.

The family of Veronica (Kunze) Lyons created this Life Tributes page to make it easy to share your memories.