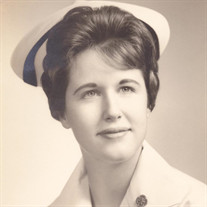 Velinda Sue (Norris) Jonson, 81, a longtime resident of Hudson, NH, died on Friday, October 29th at her home with her loving husband by her side. Born in Flint, MI on Sept 7, 1940, Velinda was the daughter of the late Donald Frank Norris, Sr. and Harriet Velinda (Kurtz) Norris.  She is survived by her husband of over 56 years, Edward C. Jonson.  She is also survived by her son and daughter-in-law, Matthew and Wendy Jonson of Windham, NH, two brothers and a sister-in-law, Donald Frank Norris Jr. and Gail Norris of Newport, MI, and David Owen Norris of Flint, MI, her grandchildren, Alexander and Amanda Jonson, 14 nieces and nephews, and 15 great nieces and nephews. She is terribly missed, but we know her love for all endures with us. As a young woman, Velinda graduated from Flint Central High School in 1958. She earned her nursing degree from Hurley School of Nursing in 1961, and became a registered nurse to care for others.  She worked in pediatrics and public health during her service as an RN.  Eventually Velinda stepped away from nursing to devote her time to supporting and raising her family, but she always kept her nursing license current. Velinda deeply loved her family and pets and would proudly share pictures and stories with all she knew. She also loved her friends and each of her church families.  She was an active member of the choir in each place she lived as well as leading the prayer chain and organizing Marriage Encounter.  Velinda had a deep belief and commitment in her faith, which made her the perfect leader for her church prayer chain, always trusting God would listen to everyone’s needs with gratitude.  She frequently took on other peoples’ concerns to help share their burden in a time of need.  Velinda’s calling was to care passionately for other people, and she did it throughout her life for family, friends and neighbors.   As a big sister, she cared for her brothers while they were all growing up together and had fun telling them scary Halloween stories. As a military spouse she cared for her family through six relocations; and everywhere she went she found the good things to focus on, usually being the first person to find the silver lining in any new city or situation. For her son, she had a priority to create learning opportunities and rejoice in his successes.  She also loved games and mind puzzles, and always had something ready for the family to do on a long car ride -- with Velinda, boredom was not an option.  She enjoyed many sleepovers with her grandchildren and enthusiastically planned fun activities and games to do with them.  Additionally there were visits to her garden, both indoors and outdoors, where every plant seemed to thrive from her touch. Velinda would say she was shy, but that is not how others saw her.  She was outgoing, friendly, cheerful, kind and thoroughly enjoyed chatting; frequently being the last to leave the church coffee hour or any other get together.  She also was a good listener and would note others needs and look for things that would support them.  Despite frequent moves thanks to the military, she found ways to stay in touch with friends and also led the family to build new foundations and friendships wherever they lived.  Velinda was very social and enjoyed meals at T-Bones with family and friends, and welcomed any opportunity to gather with others.  She especially looked forward to time with her grandchildren and had a love for all things they did, regardless of how great or small the endeavor.   Velinda is remembered as a loving wife, mother, grandmother and a dear friend to all who knew her. In lieu of flowers, you can make a memoriam donation either to Trinity Lutheran Church (https://www.tlc-chelmsford.org/online-giving put the memoriam in the notes field) or to the Nashua Soup Kitchen and Shelter (https://nsks.org/donate/). Visiting hours will be determined soon, and this will be followed at a later date with a memorial service, including joyful singing, at Trinity Lutheran Church, in Chelmsford, MA, as soon as the rules permit it. Visiting hours will be held on Thursday, November 18th from 4pm - 6:30pm with a Prayer Service beginning at 6:30pm in the funeral home.

Velinda Sue (Norris) Jonson, 81, a longtime resident of Hudson, NH, died on Friday, October 29th at her home with her loving husband by her side. Born in Flint, MI on Sept 7, 1940, Velinda was the daughter of the late Donald Frank Norris, Sr.... View Obituary & Service Information

The family of Velinda Sue Jonson created this Life Tributes page to make it easy to share your memories.