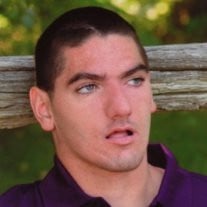 Thomas “Tommy” Bickford, 23, of Hudson, died Wednesday November 6, 2013 at the Southern New Hampshire Medical Center in Nashua. He was born August 17, 1990, the son of James and Janet (Trerise) Bickford of Hudson. Tommy was a true people person and loved being in the company of family and friends. He was a graduate of Alvirne High School and attended the Nashua Center. Besides his loving parents, survivors include a sister Allison Bickford of Hudson, a paternal grandmother Robina Bickford of Hampton Bays, NY, maternal grandparents Clark and Vivian Trerise of Colton, NY. As well as by several aunts and uncles; Tom and Carol Kerr of Punta Gorda, FL, Robert and Barbara Bickford of Hampton Bays, NY, Jeff and Janice Bickford of Sanford, NC, Gail and Arthur Fisher of North Tonawanda, NY, Susan and James Scott of Potsdam, NY, Rebecca and Paul Bartkus of Westminster, MA. His loving cousins; Tim, Chris, Jenny, Dan, Robyn, Meghan, Lauren, Nicole, Josh, Lynde, KC, Marly, Daphne, and Spencer. Also, his loving four legged companion Oscar, who was always by his side. Tommy was predeceased by his paternal grandfather, Norman Bickford. Jan and Jim would also like to thank Tommy’s extended family; the paraprofessionals, teachers and therapists within the Hudson School System, J & K Nursing Providers, The Nashua Center, and the numerous dedicated medical professionals who cared so lovingly for Tommy. Thank you for all the care over the years. Visiting hours will be held on Monday, November 11th from 4pm-6:30pm with a Service of Remembrance beginning at 6:30pm in THE DUMONT-SULLIVAN FUNERAL HOME, 50 FERRY ST. IN HUDSON. Following cremation, a private burial will take place in the Adirondaks where Tommy always found peace. In lieu of flowers the family requests donations be made in Tommy’s loving memory to The Nashua Center, PO Box 1269, Nashua, NH 03061.

The family of Thomas "Tommy" Bickford created this Life Tributes page to make it easy to share your memories.