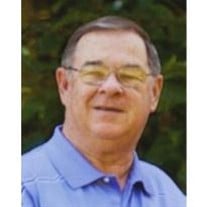 Thomas F. Walsh, 72, passed away Saturday, May 12, 2012 at the Southern NH Medical Center in Nashua after a courageous battle with cancer. He was born on January 13, 1940 in Hartford, CT, a son of the late William T. and Rosella (Kearney) Walsh.  Tom was also predeceased by two brothers Robert and William, and two sisters Jean and Margaret. Tom enjoyed playing golf, spending time with friends and traveling with his wife, Ginny (Skinner) Walsh of Nashua. He was very proud of his new vacation home in The Villages and thankful for all the new friends they made in Florida. More than anything though, Tom loved his family and the close bond they maintained. Tom was raised in Bloomfield, CT, where he served as a volunteer firefighter. From 1958-1960, Tom served his country in the Army, and was stationed in San Antonio, TX and Denver, CO.  Upon his return to Connecticut, Tom began working for the Hartford Electric Light Company where he met his wife.  Tom began taking college courses at the University of Hartford while working during the day. Though it was difficult to finish college while also working full-time and starting a family, Tom proudly graduated in 1976.   After living for several years in Pittsfield, MA, where they made and maintained many friendships, Tom and Ginny moved the family to Nashua, NH in 1980. Tom began working at Door Control, Inc. where he stayed for over 30 years. Selling automatic doors around Northern New England, Tom loved his job, and made many friends along the way.  He was known for a booming voice, always having a new joke ready, and a twinkle in his eye. In Nashua, Tom and Ginny have had the good fortune of meeting many wonderful people. Tom was also part of a Wednesday night golf league for over 30 years and enjoyed the sport and camaraderie of friends. Tom was very proud of his large, extended family with many nephews, nieces, and cousins. He most enjoyed spending time with his wife, children, and grandchildren. This included many carefully planned family vacations, Sunday afternoon dinners, birthday parties, and any event his grandkids were participating in.   Tom's legacy will be how he taught us all to love and appreciate family.   Tom's family would like to thank the nurses at Foundation Oncology and the staff at SNHMC for the wonderful compassion and care they gave Tom and his family during his illness. Besides his loving wife of 44 years, Ginny, Tom is survived by a son and daughter-in-law Greg and Cheryl Walsh of Brentwood, NH, a daughter and son-in-law Carrie and Christopher Dawe of Nashua, NH, and a son and daughter-in-law Kevin and Angela Walsh of Nashua. His seven beautiful grandchildren; Lindsey and Ryan Walsh, Kelsie, CJ, and Kylie Dawe and Aiden and Sheridan Walsh and three grand-dogs, Maggie, Dublin and Rusty. Tom is also survived by two brothers, John H. Walsh of Middleton, CT and Edward and Ethel Walsh of Phoenix, AZ, his brother-in-law and sister-in-law Robert and Nancy Skinner of Torrington, CT, his sister-in-law Rita Skinner, along with numerous nieces, nephews, and cousins who loved him very much.   Visiting hours will be held on Thursday, May 17th from 4-7pm at the Dumont-Sullivan Funeral Home, 50 Ferry Street, Hudson, NH.  A celebration of his life will be held at the Immaculate Conception Church, 216 East Dunstable Rd. on Friday, May 18th at 10:00am. ALL TO MEET AT CHURCH. In lieu of flowers, donations may be made to SNHMC, 3 West Oncology, PO Box 2014, Nashua, NH 03061, In Memory of Thomas Walsh or online at www.SNHHS.org.

Thomas F. Walsh, 72, passed away Saturday, May 12, 2012 at the Southern NH Medical Center in Nashua after a courageous battle with cancer. He was born on January 13, 1940 in Hartford, CT, a son of the late William T. and Rosella (Kearney) Walsh.... View Obituary & Service Information

The family of Thomas Walsh created this Life Tributes page to make it easy to share your memories.