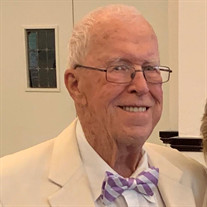 Thomas J. Michaud, Jr., 93, of Bedford, NH passed away on Wednesday, February 9, 2022 in Bedford.  He was born in Millinocket, Maine, son of the late Thomas J., Sr. and Marie (Legasse) Michaud.  Tom graduated from Stearns High School and later proudly served his country in the US Army and then in the US Air Force. His military service ended in 1949 as a draftsman. This prepared him for what ended up being a very long and distinguished career of 40 years as a planning engineer with Stone & Webster Engineering Corporation in Boston, Massachusetts. Tom was married to Vivian (Deveau) Michaud for over 40 years; she preceded him in death in May 1995. He was also predeceased by a son, Thomas J. Michaud III.  He was a member of the American Legion of Hudson Post 48 for many years. He was a volunteer for the Nashua Soup Kitchen for 20 years, was a member of the Hudson Senior Center for many years and was a long-time parishioner of St Johns Catholic Church in Hudson. Tom loved woodworking and was a skilled carpenter. He loved gardening, which meant canning many many fruits and vegetables and sharing them with his neighbors. He was also a very accomplished pool player. Tom also enjoyed traveling. He will be missed by his friends and especially his family. He touched many with his jovial and charming personality. Tom is survived by his loving family, which includes his daughter, Marie Cassalia and son-in-law Don Cassalia of Elkton, MD, grandchildren, Katelyn Pepper (Cassalia) and her husband Greg Pepper, and Joseph Cassalia and his wife Susan (Benjamin), two great grandchildren, Lillian Pepper and Dominic Cassalia, his dear friend, Priscilla Brodeur, as well as a niece and several nephews.  A time of visitation will be held on Wednesday, February 16th from 9am -10:30am, with a Service of Remembrance taking place at 10:30am, all in the Dumont-Sullivan Funeral Home, 50 Ferry St., in Hudson. Those attending services inside the funeral home are required to wear a face mask or facial covering. Burial will be held in St. Patrick Cemetery in Hudson.

The family of Thomas J. Michaud, Jr. created this Life Tributes page to make it easy to share your memories.