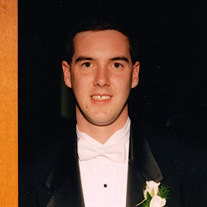 Thomas Patrick Flaherty, 46, of Nashua NH passed away peacefully at the Merrimack Community Hospice House on Saturday, July 18, 2015 after a valiant year-long battle with esophageal cancer. Tom was born February 10, 1969 in Hartford, CT to John J. Flaherty and the late Mary (Landers) Flaherty of Hartford, CT. He attended St. Brigid School and South Catholic High School in Hartford, CT. He was a 1991 graduate of Saint Michael’s College in Colchester, VT where he excelled in academics and was the captain of the cross country team. He earned his Masters of Science degree in Finance from Bentley College in 2003. He met his love and future wife at St. Michaels College, Colleen (Scully) Flaherty, with whom he shared 19 years of marriage. Tom was a beloved husband, son, brother, father, uncle and friend. He was an active volunteer in his community dedicating his time and talents in many varied ways. His favorite volunteer activity was serving as a CYO basketball coach for St. Joseph the Worker Parish in Nashua. He was well known for his willingness to lend a hand to anyone in need. He always went about his work and activities with a smile. He loved being outdoors hiking, biking and spending time with his family. During his college years, he was a devoted long distance runner and participated in the Boston and Marine Corps marathons. He was an avid fan of sports of all kinds, in particular, the Boston Red Sox and the former Hartford Whalers. Tom spent nearly 20 years working as a financial analyst for Kronos Incorporated of Chelmsford, MA where he immensely enjoyed his work and he respected his colleagues. He had great pride in his company and was a dedicated employee, working even into his final days. In addition to his wife and father, he is survived by his three children; Brendan, Kevin and Erin Flaherty of Nashua, NH; a sister and brother-in-law Joan (Flaherty) and James Corradino of West Hartford, CT; a brother and sister-in-law Sean and Luz Flaherty of Newington, CT; a brother James Flaherty of Hartford, CT; a brother-in-law, Kevin P. Scully II and his wife, Jennifer (DelGrosso) Scully of Dover, NH; his parents-in-law, Kevin and Mary Scully of Burlington, VT; nieces Caitlyn and Ciara; and nephew, Declan. He is also survived by many aunts, uncles and cousins. He was a communicant of St. Joseph the Worker Parish in Nashua NH. The family would like to extend their thanks to the dedicated staff of St. Joseph Hospital (unit 5 South and The Cancer Center); the Community Hospice House in Merrimack NH; Kronos Incorporated; the neighbors of Longwood Terrace; the Saint Michael’s College community, the Family Ministry Committee of St. Joseph the Worker Parish; and the Presentation of Mary Academy community for their unending support and care during Tom’s illness. Visiting hours will be held on Friday, July 24th from 5pm - 8pm in the DUMONT-SULLIVAN FUNERAL HOME, 50 FERY ST. IN HUDSON. A funeral mass will be celebrated on Saturday, July 25th at 10am in St. Joseph the Worker Parish, 777 West Hollis St., in Nashua. All may meet at church. Burial will be in St. Louis Cemetery, Nashua. In lieu of flowers the family encourages donations be made in Tom’s loving memory to either St. Joseph Hospital, Resource Development, Attention Oncology Center, PO Box 2013, Nashua, NH 03061-2013 or Home Health & Hospice Care, Attention Hospice House, 7 Executive Park Dr., Merrimack, NH 03054.

The family of Thomas Patrick Flaherty created this Life Tributes page to make it easy to share your memories.