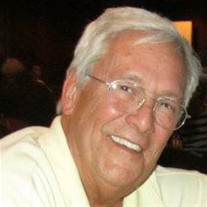 Thomas A. Boucher, 74, of Salem, NH, and formerly of Hudson, NH, died Tuesday, September 15, 2015 surrounded by his loving family after a long and courageous battle with lymphoma.   He was born July 28, 1941 in Nashua, NH, son of the late Lucien and Roseanna (Normandeau) Boucher.   Tom was the loving husband of Anne (Devlin) Boucher of Salem, with whom he shared 54 years of marriage and happiness.    Tom was a letter carrier with the US Postal Service for almost 30 years and later was employed as a Real Estate Appraiser and Broker for over 20 years. Tom was an Army Veteran who enjoyed playing cards, traveling to casinos, and spending time with family and friends. Tom found no greater joy than that of spending time on Arlington Pond with his beloved wife, children, and their families.    Besides his dear wife Anne, family members include five children; Nadine Lambert and her husband Alan of Hudson, Michele Walsh and her husband Robert of Windham, Todd Boucher and his wife Dana of Manchester, Scott Boucher and his wife Deana of Windham, Adam Boucher and his wife Nita of Auburn, 25 grandchildren; Ryan, Jenna, Jared, Cody, Tyler, Brittney, Taylor, Connor, Garrett, Caleb, Brendan, Cameron, Courtney, Kaleigh, Celine, Elyse, Alex, Nathan, Brett, Lilah, Alayna, Billy, Derek, Nolan, and Colin, two great grandchildren; Colton and Jackson Thomas, a brother, Gerald Boucher and his wife Christine of Nashua, 4 sisters; Sandra Greenwood and her husband John of Lilburn, GA, Joanne Gosselin and her husband Ronald of Weare, NH, Connie Hawkins and her husband Michael of Weare, NH, Kathy Clayton and her husband Ron of Wells River, VT, as well as many nieces, nephews, and friends.    A funeral mass will be celebrated on Monday, September 21st at 11am at St. John XXIII Parish in St. John the Evangelist Church, 27 Library St in Hudson. All may meet at church. A graveside service will be held in St. Patrick Cemetery in Hudson. In lieu of flowers the family requests donations be made in Tom’s loving memory to the Wounded Warrior Project at www.woundedwarriorproject.org.

Thomas A. Boucher, 74, of Salem, NH, and formerly of Hudson, NH, died Tuesday, September 15, 2015 surrounded by his loving family after a long and courageous battle with lymphoma.   He was born July 28, 1941 in Nashua, NH, son of the late Lucien... View Obituary & Service Information

The family of Thomas Boucher created this Life Tributes page to make it easy to share your memories.