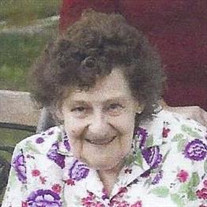 Theresa J. Brussard, 92, died on February 1, 2017 at the Greenbriar Nursing Home in Nashua, NH.  Theresa was born on July 20, 1924 in Pomquet, Nova Scotia to James and Annie (Benoit) DeWolfe.  Theresa moved to the United States at 21 and met the love of her life, Joseph Brussard, who as fate would have it, was also born in Pomquet. Theresa and Joe married and settled in New Hampshire to raise their family:  sons Stephen J. Brussard and Donald J. Brussard.  They lived in Derry for a time before settling in Litchfield.  Joe died in 1982, and Theresa returned to Nova Scotia in 1985, living there for 20 years.  In 2005, she returned to the United States to make her home with her son, Don and his wife, Georgia.  Before her retirement, Theresa worked for several companies in New England, the last being Treasure Masters, where she worked for many years. She was predeceased by her parents, husband, Joseph Brussard, her granddaughter, Tessa, her siblings Rita, Wilfred, and Mary.  She is survived by her son, Steve of Quinton, VA, son and daughter-in-law Don and Georgia,  of Hudson, NH, grandson, Michael of Washington, sister and brother-in-law Anna and Clement Delorey, brother and sister-in-law Clarence and Theresa DeWolfe, and brother Arthur DeWolfe all of Canada, many nieces, nephews and cousins.  Theresa loved trips to Canada, watching game shows, playing card games and board games, reading, baking, celebrating the holidays, and sharing a Red Sox game with her sons.  Theresa was known as “Gelic” to many of her family and friends, short for Angelic.  She was truly a gentle, caring woman who will be missed by all who had the privilege of knowing her.  Her family is grateful to the staff at Greenbriar for the loving care they gave Theresa during the last few years of her life. Visiting Hours will be held on Wednesday, February 8th from 5pm - 7pm in the DUMONT-SULLIVAN FUNERAL HOME, 50 FERRY ST. IN HUDSON. A graveside service will be held on Thursday, February 9th at 11am in Holy Cross Cemetery, located on Gilcrest Road in Londonderry, NH. All may meet at the cemetery. In lieu of flowers, the family asks that you consider a donation to Home, Health & Hospice Care, 7 Executive Park Drive, Merrimack, NH 03054. To share an online message of condolence or for directions, please visit www.dumontsullivan.com THE DUMONT-SULLIVAN FUNERAL HOME IN HUDSON IS IN CHARGE OF ARRANGEMENTS.

Theresa J. Brussard, 92, died on February 1, 2017 at the Greenbriar Nursing Home in Nashua, NH.  Theresa was born on July 20, 1924 in Pomquet, Nova Scotia to James and Annie (Benoit) DeWolfe.  Theresa moved to the United States at 21 and met... View Obituary & Service Information

The family of Theresa Brussard created this Life Tributes page to make it easy to share your memories.