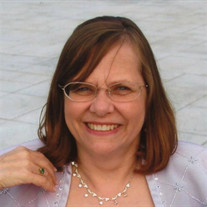 Teresa Marie Gilchrist, 62, of Litchfield, NH, passed away from cancer on Tuesday, November 1, 2016 at Community Hospice House in Merrimack, NH. She was born on August 12, 1954 in Malden, MA, to John and Mildred (Pierce) McIsaac. A life-long supporter of drum corps, she met the love of her life, her husband Kevin Gilchrist, while marching with the Renegades of Revere, MA, and they married on April 20, 1974. Together they volunteered for the Spartans drum and bugle corps from 1990-1999 while their children were marching members. She was affectionately called Mom by countless members of the Spartans. Teresa exemplified living life with grace, dignity, humor, love and courage. She had a great love of life and made friends everywhere she went. She was loving, kind and respectful to everyone she met, and a champion of disability rights. Those who knew her were inspired by her strength and determination not to let multiple sclerosis stop her. She volunteered for the MS Walk every year, and she and her husband travelled around the world from Hawaii to Las Vegas to Ireland and Paris as well as going on several cruises. She is survived by her husband, Kevin, her children Kelly Gilchrist and husband Charles Alaimo Jr., Kimberly Crean and husband Kevin and Kevin Gilchrist and wife Kathleen, her grandchildren Connor and Sophia Crean, and Grace, Molly and Edward Gilchrist as well as her brothers Kenneth, Leo and John McIsaac. She was predeceased by her parents, John and Mildred McIsaac. Visiting Hours will be held Wednesday November 9th from 5-8pm at the Dumont-Sullivan Funeral Home, 50 Ferry St., Hudson. A funeral mass will be celebrated the following morning beginning at 9:30am in St. Patricks Church, 29 Spring St., Nashua followed by burial in St, Patricks Cemetery, Hudson.

Teresa Marie Gilchrist, 62, of Litchfield, NH, passed away from cancer on Tuesday, November 1, 2016 at Community Hospice House in Merrimack, NH. She was born on August 12, 1954 in Malden, MA, to John and Mildred (Pierce) McIsaac. A life-long... View Obituary & Service Information

The family of Teresa M. Gilchrist created this Life Tributes page to make it easy to share your memories.

Teresa Marie Gilchrist, 62, of Litchfield, NH, passed away from...