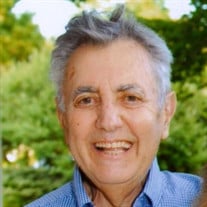 Sylvio Rossi, 85, of Nashua, N.H., passed away following a long illness on November 10, 2014. He was born in Woonsocket, R.I., on March 8, 1929, the son of Thomas and Cleonice (Pettine) Rossi. He is survived by his beloved wife, Constance (Pepin) Rossi with whom he was married for almost 60 years, and his two children Dr. Thomas Rossi of Marblehead, MA, and Roberta Rossi Valentine of The Woodlands, TX, and his three grandchildren, Quinn Valentine, Mia Rossi and Silvio Rossi. He had three loved sisters, Lydia Rossi (predeceased), Rita Rossi and Ella (Rossi) Pedro. Sylvio loved the woods. He enjoyed gardening and was famous for growing superb gardens. He also loved to fish and hunt and was a past charter member of the Smithfield Lodge of Elks, the Smithfield Sportsmen Club and a longtime member of the Nashua Association of Fish and Game. Sylvio enlisted in the R.I. Army National Guard in June 1948 and retired as a full Colonel and Director of Personnel in August 1982 with 34 years of service. During this period he held many key positions, including serving on the National Guard Bureau Review team at the Pentagon. During this tour of duty he inspected units from Hawaii, throughout the continental US and Puerto Rico and the Virgin Islands. When the First Gulf War broke out, he was appointed Director of Logistics for Fort Devens and remained in that position until the end of the war. Sylvio retired on May 30, 1991 after 43 years of service to his country. Upon retirement, he received the first outstanding Civilian Employee Award, including a letter of recognition from the Pentagon. Sylvio’s love of his country was only surpassed by his love for his family. All who had the pleasure of knowing Sylvio knew that the great treasures of his life were his family, his wife and his grandchildren. Visiting hours will be held on Sunday, November 16th from 3pm-5pm in the DUMONT-SULLIVAN FUNERAL HOME, 50 FERRY ST. IN HUDSON. A funeral mass will be celebrated on Monday, November 17th at 9:30am in St. Joseph the Worker Parish, 777 West Hollis St., in Nashua. All may meet at the church. Burial will be held later that day at 12:30pm in the NH State Veteran Cemetery, 110 Daniel Webster Highway, Boscawen, NH 03303. In lieu of flowers the family requests donations be made in Sylvio’s loving memory to the Nashua Fish & Game Association, PO Box 28, Nashua, NH 03061. Please note in the donation, “In memory of Sylvio Rossi,” as your generosity will be used to construct a memorial bench at their facility.

Sylvio Rossi, 85, of Nashua, N.H., passed away following a long illness on November 10, 2014. He was born in Woonsocket, R.I., on March 8, 1929, the son of Thomas and Cleonice (Pettine) Rossi. He is survived by his beloved wife, Constance... View Obituary & Service Information

The family of Sylvio Rossi created this Life Tributes page to make it easy to share your memories.