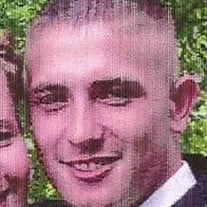 Steven Edward Plourde, 33, of Merrimack, NH died unexpectedly on March 13th, 2015 in Nashua, NH. Steven was born in Tampa, FL on September 25, 1981 son of Steven Plourde and Maria Fisher. Steven will be greatly missed by family and friends.  He will be remembered as a loyal friend, loving son, nephew, cousin and brother.  Steven would do anything to help a friend in need and enjoyed spending time with his sister, who was his best friend, and with his niece, and nephew who meant the world to him. Steven is survived by his father Steven Plourde and his long time companion, Bonnie Pagon of Zephyerhills, FL; mother Maria Fisher and husband Christopher of Lyndeborough, NH; a sister Rose Plourde and husband John Mall and their children Isabela Plourde and Even Mall of Merrimack, NH; brother Kyle Fisher of Manchester, NH; sister Cynthia Fisher of Derry, NH and many uncles, aunts, cousins and dear friends. Visiting Hours will be held on Thursday March 19th from 4-7pm in the Dumont-Sullivan Funeral Home, 50 Ferry St., Hudson. A Private Funeral will be celebrated at a future time.

The family of Steven Edward Plourde created this Life Tributes page to make it easy to share your memories.