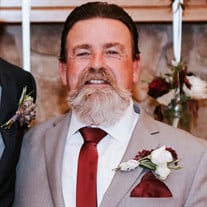 Stephen E. Merrill, 65 of Litchfield, NH passed away on Friday, October 15, 2021, at the Community Hospice House in Merrimack, NH with his loving family by his side. Steve valiantly fought Glioblastoma (brain cancer) for 15 months. Steve was born September 15, 1956 in Lowell, MA, son of the late Frank P Merrill and Hilda (Dufresne) Merrill. He was predeceased by his mother-in-law, Mildred (Wright) Slater. Steve was the beloved husband of Lucinda A. (Slater) Merrill of Litchfield, with whom he shared 34 years of marriage.  Steve grew up in Tyngsborough, MA and graduated Tyngsborough High School in 1975. Steve and his family have resided in Litchfield for 25 years. Steve was previously employed with Honeywell / Bull HN where he worked in their warehouse. He later became a truck driver and was employed with SP Richards for 20 years and later, East Branch Delivery and Portland Air Freight.  Steve loved boating, especially on Lake Winnipesauke and Winnisquam, riding his Harley Davidson motorcycle, hanging out poolside with his family at his home, playing with and spoiling his grandson and being fastidious about his lawn. Besides his loving wife, Lucinda, he is survived by his  son,  Tyler S. Merrill and his wife Lauren (Camelio) Merrill  of Manchester, NH, his grandson, Declan T Merrill, his brother, David P Merrill and his significant other Jennifer McCormick, both of Merrimack, NH, his father in law,  Richard Slater of Nashua, NH, three brothers in law and their families; Richard & Cindy Slater of Frisco, TX, James Slater of Nashua, NH and David & Lisa Slater of Nashua, NH, as well as many beloved nieces and nephews.    Visiting hours will be held on Wednesday, October 20th from 4pm - 7pm in the Dumont-Sullivan Funeral Home, 50 Ferry St., in Hudson. A Mass of Christian Burial will take place on Thursday, October 21st at 10am in St. Kathryn Church, 4 Dracut Road, Hudson, NH. All may please meet at church. Burial will take place in St. Patrick Cemetery in Hudson. Face masks and / or facial coverings are optional for those attending services.

Stephen E. Merrill, 65 of Litchfield, NH passed away on Friday, October 15, 2021, at the Community Hospice House in Merrimack, NH with his loving family by his side. Steve valiantly fought Glioblastoma (brain cancer) for 15 months. Steve was... View Obituary & Service Information

The family of Stephen E. Merrill created this Life Tributes page to make it easy to share your memories.

Stephen E. Merrill, 65 of Litchfield, NH passed away on Friday,...