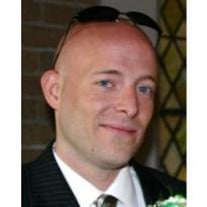 Shad W. Smith, 30, of Nashua, NH died unexpectedly on Tuesday June 15, 2010. Shad was born on April 22, 1980 son of Warren Smith of Derry, NH and Janet (Magro) Consoli and her husband Stephen of Hudson, NH. Shad graduated from Alvirne High School where he proudly was a member of the Forestry Team. He then went on to graduate Cum Laude from U Mass Lowell with a Bachelors' in Criminal Justice. He loved music, motorcycles, skiing and being in the outdoors. He truly enjoyed working with children. Shad had much love for his mother and sister, but there was a special place in his heart for his nephew William with whom he was so proud. Besides his loving parents, Shad is survived by a sister, Jaclyn Smith and her fiancé Randy Reda of Litchfield, NH; maternal grandparents, William and Theresa Magro of Tewksbury, MA; paternal grandmother, Doris Smith of Derry, NH; three uncles, William Magro and his wife Fran of Methuen, MA, Thomas Magro of Nashua, NH and his girlfriend Darlene Forsyth of Dracut, MA, and Brian Smith and his wife Loretta of Derry, NH; an aunt Maureen Magro of Dunstable, MA; a nephew, William Smith of Litchfield and many cousins and dear friends. Visiting Hours will be held on Mon. June 21st from 3-7pm in the DUMONT-SULLIVAN FUNERAL HOME, 50 FERRY ST., HUDSON with a prayer service beginning at 6pm.

The family of Shad W. Smith created this Life Tributes page to make it easy to share your memories.