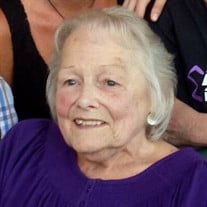 Sandra Sandberg, 75, of Nashua, NH, died Sunday, April 16, 2017 at St. Joseph Hospital in Nashua following a brief illness.  She was born March 27, 1942 in Winchester, MA, daughter of the late Harry and Norma (Bianchi) Mueller.  Sandy can best be described as “selfless.” She never put herself first and made sure that friends and family always felt special. Affectionately referred to as a “Hallmark Queen”, she remembered birthdays, holidays, anniversaries, and any date that may have been important in someone’s life by sending a card with her beautiful poetic wishes. Sandy was a hardworking mother, who raised two girls on her own and loved to be surrounded by them and as they grew, their families as well. Her great granddaughter, Quinn Marie, lit up her world. Sandy lived a life of giving and will fondly be remembered by all who knew her.  Sandy’s loving family includes two daughters, Kristen and Michael Morrison, with whom she resided in Nashua, Kim Brown and her husband Gary of North Attleboro, MA, four grandchildren, Lindsay Eaton and her husband Spenser of Amesbury, MA, Taylor Morrison of Boston, MA, Justine Brown of North Attleboro, MA and Dillon Brown of North Attleboro, MA, one great granddaughter, Quinn Marie Eaton of Amesbury, MA. She is survived also by one sister, Gretchen Raymond and her husband Loren of Akron, OH, and one brother, Skip Mueller and his wife Sharon of San Diego, CA, as well as many dear friends and extended family.  All services will be private.

The family of Sandra Sandberg created this Life Tributes page to make it easy to share your memories.