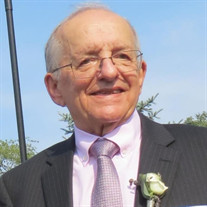 Salvatore “Sal” M. Mazzola, Jr., 87, of Hudson, NH and formerly of Wilmington, MA, passed away at his home on Tuesday, January 5, 2021 with his loving family by his side. He was born February 15, 1933 in Boston, MA; son of the late Salvatore and Concetta (DeMarco) Mazzola. He was married to Frances (Ruggieri) Mazzola of Hudson and shared 63 years of marriage together. Sal and Frances lived in Wilmington, MA for almost 40 years, where they raised their children and later in life retired to homes in Hull, MA, Englewood FL, and then Hudson, NH in 2012. Sal was raised in Somerville MA, went to Somerville High School and then joined the United States Coast Guard. Following his honorable discharge from the military, he attended the University of Massachusetts receiving a Batchelor of Science degree in Mathematics. He spent his career in computer science working for several local high technology companies. He was well known as the guy who could make and fix anything and proudly passed on those skills to his children and grandchildren. He had many interests but particularly loved to fish, and when he was younger he loved to play racquetball and scuba dive regularly. He was a wonderful husband, father and Papa. His greatest joy was his grandchildren and great grandchildren who all adored him immensely. Sal is survived by his devoted wife, Frances, and his four loving children: Michael and his wife Kirsi, Lori and her husband Michael, Stephen and his wife Valerie, Robert and his wife Linda, 12 grandchildren: Keri and her husband Chad, Michael and his wife Natalie, Selina and her husband Michael, Matthew and his wife Austyn, Hanna and her fiancé Stefan, Jennifer and her husband Daniel, Robert, Nicole, Kaela and her fiancé Justin, Brian, Marc and Eric, and two great-grandchildren: Delia & Calihan. He is also survived by four siblings: Concetta Rossetti, Phillip Mazzola, Robert Mazzola and his wife Judith, Ann Scalese and her husband James as well as many nieces and nephews. All services will be private. Those wishing to make a memorial donation in Salvatore’s loving memory are asked to consider the American Cancer Society and may do so at www.cancer.org

The family of Salvatore Mazzola Jr. created this Life Tributes page to make it easy to share your memories.