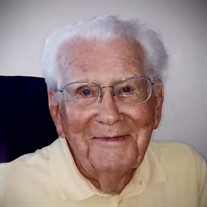 Rupert Elmer Tate Jr. passed away peacefully July 22, 2020 at The Fairview Nursing home in Hudson. He was born May 22, 1921 in Milford, N.H. to the late Rupert Sr. & Rose Tate. Rupert was preceded by his wife of 74 years , Alice (Bouley) Tate who passed away Sept. 2015. He was also preceded by a daughter Nancy who passed away  in 1952, and two great grand-daughters Lillian Burns and Mia Yates. He was also preceded by his brothers Wesley, Robert, Gordon (Pete) and a sister June Cloutier. Rupert is survived by his four daughters and their husbands: Sandra & Robert Morency, Geradine & Carl Burns, JoAnn & David Burns and Donna & Bruce Christiansen,  10 Grandchildren:  Robert & Andrew Morency, Wendy Yates, Ronald & Jason Twardosky, Mike Burns & Deanna  Curtis, Lisa Brehme, Melanie Bunnell, Laurie Christiansen, 25 Great Grandchildren and 6 Great Great Grandchildren. He was a life long resident of Hudson, N.H. He was a World War II veteran who fought in the Battle of the Bulge and the Normandy Invasion. Rupert was a supervisor at Improved Machinery for many years before starting his own business, Bud Tate’s TV and appliances and Nashua Honda in Nashua in the late 1950’s and retiring in 1972.  He enjoyed traveling  with his wife in their RV, spending time in Florida, playing golf, riding his bike and working in his yard and wood working shop where he made many beautiful pieces of furniture for his children. The family wants show appreciation to Fairview nursing home and Laural Place for the great care our dad received there. Visitation will be held on Tuesday, July 28th from 5-7pm at the Dumont-Sullivan Funeral Home, 50 Ferry St., Hudson. A limited number of guests will be allowed inside the funeral home to visit with the family for a limited amount of time on a rotating basis. A Funeral Mass will be held the following morning, Wednesday July 29th beginning at 10am in St. Katherine’s Church, 4 Dracut Rd., Hudson, NH. All guests are asked to please wear a mask or facial covering.

Rupert Elmer Tate Jr. passed away peacefully July 22, 2020 at The Fairview Nursing home in Hudson. He was born May 22, 1921 in Milford, N.H. to the late Rupert Sr. & Rose Tate. Rupert was preceded by his wife of 74 years , Alice (Bouley) Tate... View Obituary & Service Information

The family of Rupert Tate created this Life Tributes page to make it easy to share your memories.