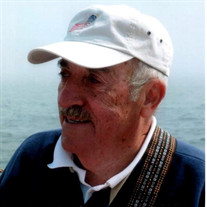 Ronald Stickney, 86, of Bedford, NH and formerly of Windham, NH, died Friday, November 13th in Bedford, following a lengthy illness. He was born August 30, 1934 in Lynn, MA, son of the late Frederick and Juliette (Sylvain) Stickney. Ronald was predeceased by his beloved wife, Mary “Toni” (Chessey) Stickney in September of 2013 and was also predeceased by a son, James Stickney as well as by a sister, Joan Wood and a brother, Richard Allen Stickney. Ronald was a proud decorated Korean War Veteran, having served in the United States Army for three years. Following his time as a veteran, Ronald attended Northeastern University, receiving a degree in Electrical Engineering. He retired from Frequency Sources / Loral Microwave in 1995, following 27 years of dedicated employment where he developed missile guidance systems and designed microwave components and systems for the Defense Department. Ronald enjoyed sailing on Newfound Lake, playing golf, reading and traveling. His loving family includes his devoted four children; Barbara Carter and her husband Jay of Bedford, NH, Anthony Stickney of Cary, North Carolina, Linda Pajari and her husband Craig of Westford, MA, Robert Stickney and his wife Doreena of Hudson, NH, a brother, Earl Stickney and his wife Sandra of Lynn, MA, a sister, Janice Morello and her husband Joe of Cape Coral, FL, as well as13 grandchildren, two great grand children and several nieces, and nephews. A private graveside service will be held in the New Plains Cemetery in Windham. Those that would like to make an expression of sympathy are asked to consider a donation in Ronald’s loving memory to the Alzheimer’s Association at www.alz.org

The family of Ronald Stickney created this Life Tributes page to make it easy to share your memories.

Ronald Stickney, 86, of Bedford, NH and formerly of Windham,...