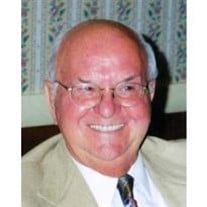 Romeo R. Gendron, 86, of Hudson, NH died Saturday July 31, 2010 at St. Joseph Hospital in Nashua, NH surrounded by loving family. Romeo was born on Feb. 8, 1924 in Nashua, NH son of the late Joseph and Clarisse (Lavoie) Gendron and was also predeceased by two brothers, Albert Gendron and Joseph Gendron; and a sister, Maryanna Pombrio. Romeo spent 63 years as the loving husband to Julie (Dube) Gendron of Hudson. Romeo graduated from Nashua High School in 1942 and went on to attend Nashua Business College. He served his country honorable in the Navy during both WWII and the Korean Wars. During WWII he was stationed in Sicily, Italy and N. Africa. He played an active role in the Sea Bee Reunion Program and the Hudson Seniors. He worked for 35 years at J.F. McElwain Shoe, then to Nashua Corp. for 10 years. He also held a part-time position at the Dumont-Sullivan Funeral Home for more than 30 years. Romeo was active in the Catholic faith and was one of the founders of the St. John the Evangelist Church's original parish council where he held a Eucharistic minister's position, served as Lectern and also helped to found their Men's Club. Besides his loving wife Julie, Romeo is survived by two brothers, Alec Gendron of Nashua and Rene Gendron of Hudson; two godsons, Dennis Dube (Nephew) of Hudson and Bryan Hulit of Concord, NH; a goddaughter, Kathy Roy of Nashua; two nephews, Charles Darling of FL and Robert Lavoie of TN; eight nieces, Estelle Prenaveau of Nashua, Sheila St. Jacques of Nashua, Yvonne Caravella and her husband Greg of CA, Annette Lavoie of Nashua, Susan Goulet of Nashua, Kathy Dube of Hudson, Ann-Marie Gilman of Hudson and Barbara Nugent of FL; a great-niece, Adeline Lavoie of TN and many cousins and dear friends. Visiting hours will be held on Tues. Aug. 3rd from 4-7pm in the DUMONT-SULLIVAN FUNERAL HOME, 50 FERRY ST., HUDSON. A Funeral Mass will be celebrated the following morning on Wed. Aug. 4th at 10am in Blessed John the XXIII Parish at St. John the Evangelist Church, 27 Library St. Hudson. All To Meet At Church. Burial will take place in St. Patrick Cemetery, Hudson.

The family of Romeo R. Gendron created this Life Tributes page to make it easy to share your memories.