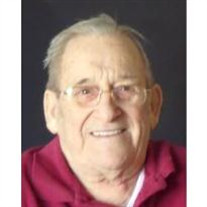 Romeo W. Landry Obituary Romeo W. Landry, 88, of Hudson, NH died Wednesday July 18, 2012 at the Courville of Nashua Care Center. Romeo was born on September 7, 1923 in Nashua, NH son of the late William and Juliette (Arel) and was the loving husband of the late Vita Y. (Pariseau) Landry. Romeo was also predeceased by two brothers and three sisters. Romeo served his country honorably in the Navy during WWII in the Pacific and was a member of the Hudson VFW and American Legion. He loved the outdoors, golfing, hunting and working around the house. In earlier years, Romeo and his wife Vita enjoyed vacationing together in both Florida and Maine. Romeo is survived by two sons, David Landry and his wife Judith of West Lebanon, NH and Daniel Landry and his wife Carol of Hudson, NH; a daughter, Denise Dick and her husband Steven of Allenstown, NH; four sisters, Irene Labombard of Nashua, NH, Estelle Damache of Milford, NH, Gloria St. Pierre of Nashua, NH and Jennette Simonds of Boscawen, NH; three grandchildren; four great-grandchildren and many nieces, nephews and dear friends. Visiting Hours will be held on Friday July 20th from 4-7pm in the DUMONT-SULLIVAN FUNERAL HOME, 50 FERRY ST., HUDSON. With a Funeral Being held at 10:00am on Saturday the 21st of July in the Funeral Home. Burial will take place in St. Patrick Cemetery, Hudson.

The family of Romeo W. Landry created this Life Tributes page to make it easy to share your memories.