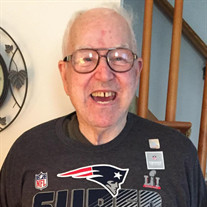 Roland E. Theberge of Hudson, NH died on January 15, 2021 at St. Joseph's Hospital, fortunately not a Covid victim. Roland was born in October 1931 to Ernest and Leona (Paquette) Theberge in Lawrence, Massachusetts. He graduated from Central Catholic High School in 1951 and from the University of Massachusetts Amherst in 1961, as a methods engineer. Between high school and college, Roland served as an Airedale for over four years in the Navy. Upon college graduation, he went to work at Sprague Electric Company in Nashua. He rose through the ranks to become Comptroller before retiring in 1989. During these years, he served as facilitator for Junior Achievement. He was a leader of Boy Scouts of America Troop 252, then based out of St. John the Evangelist Church for fourteen years. He also called bingo at St. John's for many years, sacrificing many golfing opportunities. Roland was a life time gardener and an investment guru, generously sharing the bounty of both fields with family and close friends. In his retirement, Roland spent much of his time researching the genealogy of the Theberge family. He was a devoted alumnus of Central Catholic, and took much joy in following its basketball team. Until 2010, Roland was a world wide traveler with his wife. He leaves his wife of 60 years, Joan, his daughter, Paula Smith and Gary Sullivan, his son, Jay Theberge and his wife Kami Phillips, and his son, Neil Theberge and his wife Sharron Theberge, and his sister JoAnn Troisi. Roland leaves his much loved grandchildren Craig and Deryn Smith, Douglas, Nadine, Audra, Grace and Regan Theberge. A Walk Through Visitation will be held on Wednesday, January 20th from 4:00pm - 6:00pm in the Dumont-Sullivan Funeral Home, 50 Ferry St., in Hudson. Those attending are asked to please wear a face mask or facial covering and to follow the social distancing guidelines in place. A private graveside service with military honors will be held in the NH State Veterans Cemetery in Boscawen, NH. Anyone wishing to honor Roland's memory can make a contribution to: Montagne Project, Central Catholic High School, Lawrence, MA 01841 or online at www.centralcatholic.net/support-cchs/giving

Roland E. Theberge of Hudson, NH died on January 15, 2021 at St. Joseph's Hospital, fortunately not a Covid victim. Roland was born in October 1931 to Ernest and Leona (Paquette) Theberge in Lawrence, Massachusetts. He graduated from Central... View Obituary & Service Information

The family of Roland Theberge created this Life Tributes page to make it easy to share your memories.