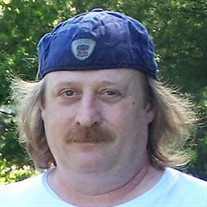 Rocky Lee Zimmerman, 51, of Hudson, NH, died unexpectedly in his home on Tuesday, May 2, 2017. He was born on October 28th, 1965 in Bismarck, ND to Dorothy (Schmidt) Schulte and the late Henry E. Zimmerman. Rocky had always been talented when it came to projects and hobbies that involved his hands. He was a skilled handyman, mechanic, and a great cook. He took pride in his work and greatly enjoyed using his skills to help family and friends in need. In his spare time, Rocky took pleasure in collecting items like coins and stamps. He shared his love and knowledge of these collections with his children, who enjoyed learning about their history with him. Rocky was a man with a big heart, he’d give of himself for anyone in need. He also loved children and animals. It wasn’t unlike him to come home with a stray cat who needed a warm home and a lot of love. In life, Rocky was a wealth of knowledge and a great friend. His sudden death came as a great shock and he will be missed by friends and family alike. Rocky is survived by his loving mother, Dorothy; his significant other, Christine Fawcett; and children, Ryan, Kelsey, and Ashley Zimmerman; all of Hudson, NH. He is also survived by brothers Darwin (Buzz) and Dion Zimmerman, also of Hudson; nephew Joshua Zimmerman and his daughter, Kyliee, of Manchester, NH; and sister-in-law Susan Foss of Salem, NH. A graveside service will be held in remembrance of Rocky on Thursday, May 18th, 11 AM, at Edgewood Cemetery. Donations, in lieu of flowers, can be made to the Rocky Zimmerman Education Fund at any St. Mary's Bank Branch, as well as being mailed to their Hudson office at: 3 Winnhaven Dr, Hudson NH 03051; addressed to the fund.

Rocky Lee Zimmerman, 51, of Hudson, NH, died unexpectedly in his home on Tuesday, May 2, 2017. He was born on October 28th, 1965 in Bismarck, ND to Dorothy (Schmidt) Schulte and the late Henry E. Zimmerman. Rocky had always been talented... View Obituary & Service Information

The family of Rocky Lee Zimmerman created this Life Tributes page to make it easy to share your memories.