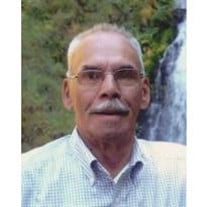 Robert Gerard Rioux, 72, entered eternal rest on Wednesday, July 20, 2011 at the Community Hospice House, after a long and courageous battle with lung cancer. He was surrounded by his loving family. Born in Clova, Quebec, Canada, he was one of twelve children born to Adrien and Eva (Morin) Rioux. He was predeceased by his parents and two of his brothers, Jean-Eve and Henri Rioux also of Quebec, Canada. Robert was still employed by Nashua Foundries of Nashua, NH at the time of his death where he had been employed for fifty years. In honor of his memory the foundry will be closed on July 26th. He moved to Nashua in 1960 for work and opportunities, and raised his children there. He was a devoted Husband, Father, and Grandfather, and enjoyed most spending his time with his family in outdoor activities. His hobbies included hunting, fishing, and hiking. Survivors include his wife CarolAnn (Bourbeau) Rioux of Nashua; his daughter Celeste (Rioux) Flores and her husband Juan Carlos Flores of Beverly Hills, MI; his sons Philip Rioux and his fiancée Chandra Culter of Brentwood, and Daniel Rioux and his partner Jennifer Preo of Deering, NH. His brothers include Leopold, Roger, Jules, and Philippe Rioux, and sisters Therese (Rioux) Aube, Clemence (Rioux) Gagnon, Fernande (Rioux) Prive and Marie (Rioux) Willett all of Canada. Robert had five grandchildren, Nicolas and Alex Flores of Michigan, Brooke Rioux, Zachary Rioux and Rose Rioux of New Hampshire. He also was blessed with many loving nieces and nephews. An hour of visitation will be held on Tues. July 26th from 10-11am at Blessed John XXIII Parish at Infant Jesus Church, 121 Allds St., Nashua with a Funeral Mass immediately following at 11am. Burial will be private.

Robert Gerard Rioux, 72, entered eternal rest on Wednesday, July 20, 2011 at the Community Hospice House, after a long and courageous battle with lung cancer. He was surrounded by his loving family. Born in Clova, Quebec, Canada, he was one... View Obituary & Service Information

The family of Robert Gerard Rioux created this Life Tributes page to make it easy to share your memories.