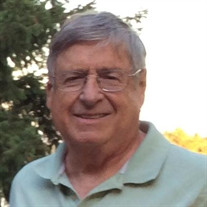 Robert “Bob” Vokes, of Ocala, Florida and formerly Hudson NH, passed away too soon on November 27, 2017. Born to Harry and Teresa Vokes, he grew up in the Bronx, where he and his brothers and sister spent their youth tearing around Parker Avenue and building a base for a life-long love of the NY Yankees. Escaping NYC on the back of a Physics degree from Hunter College, Bob continued his study of physics at UMass-Amherst, where he acquired a Masters degree and met and married the love of his life Judith Moraski.  Bob’s initial career included pioneering work in solid state lasers, and led him and Judy to Hudson NH where they resided for the next 49 years. Bob acquired an MBA from Northeastern University that launched a 25-year career in finance and risk management at VHB, Inc. Bob was an avid handyman, golfer, friend, father and grandfather.  He relished sweating a neighbor’s frozen pipe, tutoring kids in math and physics, complaining about poorly designed streets and misinformed weathermen, enjoying an afternoon walk chasing a small white ball, and nudging his children and grandchildren to do more. He was honored to serve Mount St. Mary’s Seminary and Bishop Guertin High School for many years, helping to shape the school as it is today. He is sorely missed by his wife Judy, his children Robert and his wife Jane Edwards, Mary Irvine and her husband Alex, Elizabeth and her husband Tom Stevens; and his grandchildren Sadie, Deuce, Nate, Henry and TJ as well as his brother Richard, sister Carolyn, nieces Christine, Heather, Jaime, and Christy and nephews Brad, Michael, Aaron, and Noah and their children. He is predeceased by his parents, brother Edward and sister-in-law Suzanne. Visiting hours will be held on Sunday, December 3rd from 1pm - 3pm, with a Prayer service beginning at 3pm in the DUMONT-SULLIVAN FUNERAL HOME, 50 FERRY ST. IN HUDSON, NH. A Graveside Service will take place at 10:30am on Monday, December 4th in St. Patrick Cemetery, 77 Derry Road, in Hudson, NH.  All may meet at the cemetery. In lieu of flowers, the family asks that donations be made in Bob’s loving memory to either the American Heart Association at www.heart.org or H. Lee Moffitt Cancer Center in Tampa FL at www.moffitt.org

Robert &#8220;Bob&#8221; Vokes, of Ocala, Florida and formerly Hudson NH, passed away too soon on November 27, 2017. Born to Harry and Teresa Vokes, he grew up in the Bronx, where he and his brothers and sister spent their youth tearing around... View Obituary & Service Information

The family of Robert "Bob" Vokes created this Life Tributes page to make it easy to share your memories.