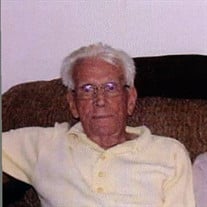 Robert Almont Tate, Sr., 93, passed away July 20, 2017 at his home in Port St. Lucie, Florida, surrounded by his loving family and his dear friend and caregiver. He was born in Milford, NH on January 4, 1924, son of the late Rupert and Rose (Moulten) Tate, Sr. Bob was predeceased by two brothers, Gordon Tate and Wesley Tate, a sister, June Cloutier, and a grandson, Johnathan Tate. Bob was the loving husband of the late Priscilla “Patt” M. (Lynch) Tate who died in November of 2009. Bob and Patt, also affectionally referred to as “Pa and Ping” were married 64 years and spent many of their retired years traveling throughout the country and Mexico. Bob joined the US navy and was stationed in Florida and Newfoundland. He later worked at Improve Machine Paper Co. (IMPCO) and held various other jobs. He owned the Bob Shell Station on East Hollis st., in Nashua as well as other service stations in Nashua and in Florida. In 1960, he opened Tate’s Garage in Hudson which would proudly service local families for several decades. He was a member of the Hudson Line Club for many years and at one time served as a volunteer for the Hudson Fire Dept.. Bob’s loving family includes two sons, Robert Tate, Jr. and his wife Diane, David Tate, Sr. and his wife Rosemary, all of Hudson, four grandchildren, Jeff Tate and his wife Holly, Kimberly (Tate) Gilroy and her husband Craig, David Tate, Jr. and his wife Jessica, Michael Tate and his fiancé Stacey, eight great grandchildren, a brother Rupert Tate, Jr. of Hudson, his caregiver and loving friend, Susanne Roche of Port St. Lucie, FL, as well as numerous nieces and nephews. A time of visitation will be held on Wednesday, August 9th from 10am to 11:45am in the DUMONT-SULLIVAN FUNERAL HOME, 50 FERRY ST., IN HUDSON. A Graveside Service will be held at noon in Westview Cemetery on Burnham Road in Hudson, following the morning visitation. In lieu of flowers, the family encourages donations made in Bob's name to Hospice of the Treasure Coast, 5090 NW Dunn Rd., Fort Pierce, FL, 34981.

Robert Almont Tate, Sr., 93, passed away July 20, 2017 at his home in Port St. Lucie, Florida, surrounded by his loving family and his dear friend and caregiver. He was born in Milford, NH on January 4, 1924, son of the late Rupert and Rose... View Obituary & Service Information

The family of Robert A. Tate Sr. created this Life Tributes page to make it easy to share your memories.