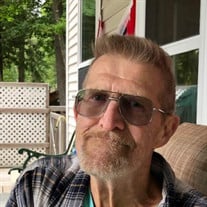 Robert “Bob” H. Riendeau, 78, of Litchfield, NH, passed away on Friday, March 13, 2020 at the Community Hospice House in Merrimack, NH, surrounded by his loving family.  He was born February 18, 1942 in Springfield, MA, son of the late Henry and Aurella (Dumais) Riendeau. He was also predeceased by his brother Roger Malo and sisters Estelle Tanner and Delores O’Strander. Bob was the beloved husband of Linda (Malenfant) Riendeau of Litchfield with whom he shared 29 years of marriage.  Bob was employed with Raytheon for over 20 years. Upon leaving Raytheon, Bob found a passion for teaching and taught Graphic Arts at the Greater Lawrence Vocational High School for several years. He later owned and operated his own businesses, CPRS Printing in Lawrence, MA and then Riendeau Printing Corp. in Hudson, NH, where he had many years of success until his retirement in 2004.   Over many years, leagues, and teams Bob was a winning softball coach to all ages. From little league to woman’s league he was a mentor to many and guided his players to many championships!   In his later years, Bob enjoyed golfing, fishing and tinkering around the house and cultivating his gardens. He loved a game of 45’s and was tough to beat! He relaxed by listening to his favorite music and always put his family first. He found no greater joy than spending time with his wife, children, grandchildren, great grandchildren and the pets he and Linda adopted along the way. Besides his dear wife, Linda, his loving family includes two daughters, Robin Riendeau of Bowdoinham, ME, Kim Cook and her fiancé Scott Buonopane of Groton, MA, two grandchildren, Lou Quintal and his wife Nicole Couture of Billerica, MA, Miranda Riendeau and her husband Ian Dunnett of Topsham, ME, and three great grandchildren, Thea, Callie, and Juniper as well as several nieces and nephews.  In following the Practical COVID-19 Guidance, there will be a time of visitation and service for Bob at a later date. Please feel free to leave a message of condolence on his dedicated webpage and once a day and time is selected, we will update social media and the webpage accordingly. In lieu of flowers, the family encourages donations be made in Bob’s loving memory to The Jimmy Fund / Dana-Farber Cancer Institute at http://danafarber.jimmyfund.org/goto/CADdleRanchers

The family of Robert Riendeau created this Life Tributes page to make it easy to share your memories.