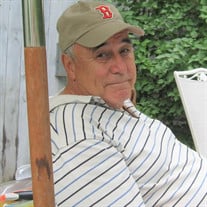 Robert (Bob) Jean LaBonte, a long-time resident of Hudson, NH and Highland Lakes, FL passed away peacefully just prior to midnight on Christmas Eve, December 24, 2020 with his loving family at his side.    Bob was born in Fitchburg, MA, but grew up in Franklin, NH one of eleven children of Arthur H. and Leda (Ricard) LaBonte.  He graduated from DeVry Technical Institute, Chicago, IL and Lowell Technological Institute, Lowell, MA, and then went on to a career in Engineering and Management at Sanders Associates / Lockheed / BAE Systems, eventually retiring after 39 years of service.   Bob was a veteran of both the Army National Guard and the Naval Reserve, serving a total of 9 years.   Bob enjoyed 63 years of marriage with Dorothy (Dot) Ann (Wallace) LaBonte who predeceased him in November 2019.   They married in 1956 and started their family while living in Baltimore, MD, before moving to Hudson, NH, where they resided for nearly 60 years and raised four children.    He was a lover of all things aviation, an avid pilot, and a long-time member of the Experimental Aircraft Association.  He built, restored, and flew his own airplanes based out of his hangars at Boire Field in Nashua, NH.   Bob was a member of St. John’s parish, a member of the fraternal benefit society Knights of Columbus and at one point served as the Grand Knight.  He also maintained honeybee colonies and was a member of the New Hampshire Beekeepers Association.    Dot and Bob enjoyed vacations camping, skiing, and snowmobiling with their children and extended family eventually building a family vacation home in the National Forest of the White Mountains where all would gather and create lasting memories.  They traveled extensively back and forth across the country in their private planes and motorhomes.  They wintered in Highland Lakes, Florida and always enjoyed entertaining visitors.    He always kept busy as the original do-it-yourselfer with constant projects and was eager to help family and friends in any way he could.  He enjoyed passing these skills onto his children and grandchildren.   He is survived by his children and their families:  Stephen LaBonte and wife Dianne of Warner, NH, Michael LaBonte and wife Mary of Hudson, NH, Richard LaBonte of Mont Vernon, NH, Ann (LaBonte) MacKenzie and husband Kurt of Keene, NH; six grandchildren:  Danielle, Devon, Nicholas and Nathan LaBonte, and Ian and Marisa MacKenzie; two great grandchildren: Kadence and Emelyn LaBonte.  Bob is predeceased by his siblings: Berthe Lavoie, Arthur LaBonte, Leon LaBonte, and Jeannine Starie, and is survived by his six siblings:  Ruth Veilleux, Alice LaBonte-Hsu, Simone Robichaud, George LaBonte, Marguerite Collins, and Pauline LaBonte, as well as 44 nieces and nephews.    Bob was always supportive of his immediate family.  We will love and remember him in our hearts forever.   A service of remembrance will be held at a later date.

Robert (Bob) Jean LaBonte, a long-time resident of Hudson, NH and Highland Lakes, FL passed away peacefully just prior to midnight on Christmas Eve, December 24, 2020 with his loving family at his side.    Bob was born in Fitchburg, MA, but... View Obituary & Service Information

The family of Robert LaBonte created this Life Tributes page to make it easy to share your memories.