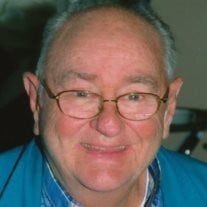 Robert A. Doyle, 84, of Nashua, NH died on Saturday March 1, 2014 at the Community Hospice House in Merrimack, NH surrounded by his loving family. Robert was born on November 14, 1929 in Cambridge, MA son of the late Attorney Robert J. and Gertrude (Goodwin) Doyle and was also predeceased by his first wife Janet E. (O’Brien) Doyle in 2002. Robert was married to Barbara (Ladd) Doyle of Nashua, NH Robert was a life-long resident of Nashua where he served as an educator for many years in the Nashua School System. He also ran the function hall at Resurrection Center for more than ten years. He was known around town for his stature and his pipe. Robert was a skilled wood craftsman and enjoyed these hobbies with his wife Barbara. He loved vacationing in his childhood beach house in Pine Point, ME in the summer. Robert served his country honorably in the US Army during the Korean War. Besides his loving wife Barbara, Robert is survived by a son, Christopher Doyle and wife Mary Boland-Doyle of Vancouver, BC; a daughter Jennifer Doyle-Veilleux-Mercer and Husband David Mercer of Nashua, NH; four step-sons, Daniel, Michael, Patrick and Bill Cronin; two step-daughters, Kathleen Burpee and Colleen Croto; six grandchildren, Chelsie Burland and her husband Jason, Caitlin Doyle, Michael Doyle, Emilee Veileux, Elizabeth Doyle and James Doyle; then later in life was blessed with nine additional grandchildren by marriage, Nathan, Carolyn, Briggette, and Della Cronin, Kaitlin Burpee, Casey and Brianna Cronin and Bradley and Meghan Croto; a great-granddaughter, Lilly Croto and many dear friends. Visiting Hours will be held on Wednesday March 5th from 4-7pm in the Dumont-Sullivan Funeral Home, 50 Ferry St., Hudson, NH. A Funeral Service will be Held in the Funeral Home the following morning at 10am (Public May Arrive at 9:30am) with burial immediately following at St. Patricks Cemetery, Hudson. In lieu of flowers the family has requested that donations be made to the Humane Society for greater Nashua, 24 Ferry Rd., Nashua, NH 03060.

Robert A. Doyle, 84, of Nashua, NH died on Saturday March 1, 2014 at the Community Hospice House in Merrimack, NH surrounded by his loving family. Robert was born on November 14, 1929 in Cambridge, MA son of the late Attorney Robert J. and... View Obituary & Service Information

The family of Robert Doyle created this Life Tributes page to make it easy to share your memories.