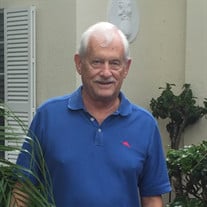 Robert (Bob) H. Canaway, 67, of Nashua, NH, and Vero Beach, FL, died Friday, February 17, 2017 at Community Hospice House in Merrimack, NH, surrounded by his family after a long battle with cancer. He was born in Medford, raised in Woburn, MA, and was the second of three sons of Herbert and Rita Canaway. Bob leaves his beloved wife of 43 years, Sandy, and their three sons: Robert II and his wife Tara, Jason and his wife Julie, and Christopher and his wife Colleen. He loved his eight grandchildren, especially making them laugh: Bobby, Johnny, Tommy, Max, Sammy, Piper, Paige, and Brooks. He is survived by his older brother Kenneth and predeceased by his younger brother Herbert Jr as well as his parents. Bob was employed for many years as a business intelligence consultant and worked in IT at major companies such as AIG, Wang Labs, and Fidelity Investments. Bob loved this work developing systems that helped his clients run their businesses. Earlier in his life, Bob had a career in broadcasting working as a DJ for multiple radio stations in the Boston area as well as reading for TV on WMUR. Bob served with distinction in the Vietnam War where he earned the Bronze Star for valor in combat as well as other commendations for his dedication and bravery. Bob was an active member of his community. He served as the President of the Nashua Deanery CYO basketball Board of Directors. For many years he was the voice of Nashua High School Football and Basketball games. He volunteered for years with Boy Scouts and worked with the Hollis and Vero Beach VFWs on veterans issues. Bob had a passion for officiating sports. He refereed high school football and umpired baseball at all levels from youth to college including some Dodgers’ spring training games. He spent many happy days with his wife in their adopted state of Florida. He loved spending time in the sun, walking the beach and fishing for the big one. Disney World had a special place in his heart, Bob beamed with joy during their many trips there with the children and grandchildren. Visiting hours will held on Tuesday, February 21st from 5pm - 8pm in the DUMONT-SULLIVAN FUNERAL HOME, 50 FERRY ST., IN HUDSON, NH. A Mass of Christian Burial will be celebrated on Wednesday, February 22nd at 11:30am in St. William Parish, 1351 Main St., in Tewksbury, MA. All may meet at church. Burial will be held in Tewksbury Cemetery. In lieu of flowers, the family requests donations be made in Bob’s loving memory to the Hollis VFW Post 11373, PO Box 1012, Hollis, NH 03049.

The family of Robert Canaway created this Life Tributes page to make it easy to share your memories.