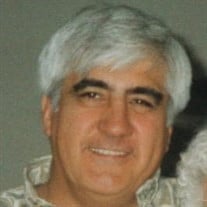 Merrimack—Robert Edward Camara, age 73, passed away Saturday, November 25, 2017, at St. Joseph’s Hospital in Nashua from heart failure. He was born in Hudson, MA, on July 5, 1943, to Daniel and Dorothy (LaJoie) Camara. He married his longtime friend, Kathy Knight, on February 21, 1975. Bob was a member of The Church of Jesus Christ of Latter-day Saints where he served as a High Priest and also as a member of the Bishopric in the Merrimack Ward (congregation) for a time. An accomplished carpenter, builder, and craftsman for over 60 years, Bob started up different businesses such as “The New England Craftsman” and “Decks-R-Us.” He was featured in the NH Magazine for his fine workmanship on many homes and projects. Well known for his love for others, Bob spent many years as Assistant Scoutmaster with the Boy Scouts of America. He taught Sunday School to young adults and gave his time and talents to Habitat for Humanity, helping them build and remodel homes for the less fortunate. He loved fishing, hunting, and had a particular gift for archery--winning many awards at national archery competitions. Many will remember him dressing as Santa Claus on Christmas Eve and handing out gifts to the children. Bob’s booming bass voice, good humor, and sincere kindness will greatly be missed. Bob had a deep and abiding testimony of his Savior Jesus Christ and experienced the great change of heart this knowledge brings. He knew that after death he would be reunited with those who had gone before him and that families can be together forever. Bod is survived by his wife Kathy, twin brother Ronald, sister Dorothy, daughter Cathy, grandson Scott McCarthy, and nephew Dan Camara. Please join us as we celebrate his life on Sunday, December 3, 2017, at 3pm at The Church of Jesus Christ of Latter-day Saints (110 Concord Street, Nashua). A brief period of visitation prior to the remembrance services will be held from 2:30-3pm.

The family of Robert Edward Camara created this Life Tributes page to make it easy to share your memories.