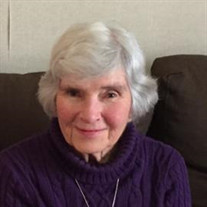 Rita N. Shepard, 91, died August 6, 2020 in Boston, MA. Rita was born in Antrim, NH, February 28, 1929, daughter of James Daniel Nazer and Anne Murdock Nazer. She was predeceased by her brothers, James D. Nazer Jr., Albert T. Nazer, Frederick L. Nazer, John F. Nazer and George E. Nazer Sr. and her sister Mary Nazer Burke. Rita graduated high school in 1947, 1st in her class. She was a scholar athlete, playing basketball and other sports. She graduated from the Nashua Memorial Hospital School of Nursing in 1949. She married her husband Donald in 1950. She was an extraordinary wife, mother, grandmother and great-grandmother. She always put everyone else first. After her children grew up she returned to nursing, private duty in Nashua and then Greenbriar Healthcare in Nashua. She was a long time member of the Church of the Good Shepherd, Nashua. She was an avid fan of the Red Sox, Celtics and Patriots and was an expert golfer. She and her husband traveled to the Bahamas, Bermuda and Barbados where they played golf and swam in the ocean.They spent many winters at Cape Canaveral, FL where they had great times with their dear friends Wally and Joan Jalbert. Rita and Donald loved music and dancing and often would dance the night away. Her favorite place in the world was Goose Rocks Beach in Kennebunkport, Maine. She is survived by her beloved husband of 70 years, Donald C. Shepard Sr. of Hudson; her beloved children; sons, Donald C. Shepard Jr. and his wife Sandra of Milford, and Robert M. Shepard and his wife Linda of Pelham; daughter, Brenda S. Conrad and her husband Albert of Groton; her beloved grandchildren; Derek Conrad of Rochester, Michael Shepard and his wife Mia of Nashua, Nicholas Shepard and his fiance Linda Tran of Nashua, Stephanie Gardner and her husband Eli of Bridgewater, MA, Nicole Zaremski and her husband Jeffrey of Norwood, MA, Allison Shepard and her significant other Justin Shaffer of S. Portland, ME, and Lindsay Shepard of Allston, MA; her beloved great-grandchildren; Savannah, Sophia, Camden and Peyton Rose; her beloved sister Irene Nazer Fortune of Independence, MO, as well as many nieces and nephews. She is also survived my many dear friends and dear neighbors including Mark and Cynthia Murray of Palm Coast, FL and the Darin Wiegers family of Hudson. Memorial and graveside services will be private. Rita will be laid to rest in Sunnyside Cemetery, Hudson, NH. Memorial and graveside services will be private. lieu of flowers please send contributions in Rita's name to the Front Door Agency, 7 Concord St. Nashua, NH or to the charity of your choice.

The family of Rita Shepard created this Life Tributes page to make it easy to share your memories.