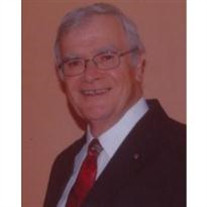 Richard Walter Hamel died suddenly, but peacefully, at his Litchfield, NH home on February 11, 2012. Born September 7, 1940 in Lawrence, MA, Richard was a proud graduate of the Central Catholic High School Class of 1958. (He delighted in receiving his Golden Diploma at his 50th reunion several years ago.) He grew up in Lawrence, met and married his wife, Kay there, and worked at Greico Bros in Lawrence for the entirety of his career. In 1984, he moved with his family to Salem, NH, and later to Litchfield, NH after his retirement. Richard was a life-long member of the Knights of Columbus, and was an active and committed member of his parish community wherever he lived, notably at his current church, St. Francis of Assisi in Litchfield. His faith in God and Church, and his love and devotion for his wife and family defined and enriched his life. Like many from his generation, he was a frugal and hard-working man, and though he never aspired to have or achieve wealth or acclaim of any sort, he counted himself bountifully rich in what he valued and cherished most: his family. Richard had a close circle of friends, especially from among his church community and his home community. He enjoyed playing cards with family and friends, especially playing his current favorite, Texas Hold-em, where he could buy-in for 5 or 10 bucks and win $25 or more on a lucky night. He especially loved to play cards on nights like those. Richard’s surviving family include his wife, Kay, with whom he celebrated in health and gratitude, 50 years of marriage of November 11,2011; his son, David and his wife, Janet of Bristow, OK and their children Stephen and Kevin; daughter, Debbie and grandchildren, Blaise, Bradley, and Donna of Salisbury, MA; son, Michael, his wife, Betsy , and grandchildren, Austin and Allison of Salem, NH; daughter, Julie and her husband Dick Bernier and their daughter, Katie of Pepperell, MA; and son, Jim, his wife, Jude, and their children, Eden and Forest of Sanbornton, NH. Richard is additionally survived by his nine siblings, Doris Alakel, Yvette Richards, Raymond Hamel, Roland Hamel, Fr. Joseph Hamel, M.M., Albert Hamel, Paul Hamel, Terry Waggett, and Roger Hamel. He was predeceased by his grandson, Aaron Hamel Richard lived a virtuous, industrious, happy, and spirit-filled life. By every important measure, he lived life beautifully well—perhaps his only real failing, leaving it too early. He had a heart of gold, and will be deeply missed, and always loved. Visiting Hours will be held on Wed. Feb. 15th from 4pm -7pm in THE DUMONT-SULLIVAN FUNERAL HOME, 50 FERRY ST. IN HUDSON. A Funeral Mass will be celebrated on Thurs. Feb. 16th at 10am in St. Francis of Assisi Church, 9 St. Francis Way, Litchfield, NH. All May Meet at Church. Burial will be in Edgewood Cemetery, Nashua. Those wishing to make gestures of remembrance and thanksgiving for Richard’s life are invited to send donations in his memory to Catholic Charities of New Hampshire (www.nh-cc.org/how-you-can-help.aspx) or St. Francis of Assisi Church in Litchfield, NH.

Richard Walter Hamel died suddenly, but peacefully, at his Litchfield, NH home on February 11, 2012. Born September 7, 1940 in Lawrence, MA, Richard was a proud graduate of the Central Catholic High School Class of 1958. (He delighted in... View Obituary & Service Information

The family of Richard W. Hamel created this Life Tributes page to make it easy to share your memories.

Richard Walter Hamel died suddenly, but peacefully, at his Litchfield,...