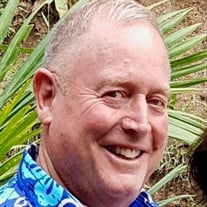 Richard “Rick” G. Wickham, 73, of Hudson, passed away Friday, August 24, 2018 at Massachusetts General Hospital in Boston following a brief illness.  He was born February 13, 1945 in Syracuse, NY, son of the late Richard H. and Roberta (Straub) Wickham. He grew up and attended schools in Fayetteville/Manlius NY, graduated High School in 1963, served as an altar boy at Immaculate Conception Church and achieved the rank of Eagle Scout at the age of 13. Rick was a career Air Force Veteran having served his country honorably for over 20 years. One of his many assignments was to the Island of Fiji where he met and married his true love, Bernadette. The first of his three daughters was born there, Lisa Marie. Following Fiji he was assigned to Strategic Air Command Headquarters in Omaha, NE where he spent the remainder of his 20 year Air Force career. His final assignment was Communications Team Chief aboard the National Emergency Action Command Post which provided direct support to the President of the United States. During this time in Omaha, he was blessed with two more daughters, Laura Lynn and Shana Lee. In 1985, Rick was honorably discharged from the Air Force. The family traveled to Hudson NH and he began his second career with ARINC Research Corporation where he worked on the Milstar Program for 18 years. After that, he worked at Raytheon in Marlboro, MA in the Program Office for Satellite Communications for the next 11 years where he retired. Rick was a communicant of St. Kathryn’s Church of Hudson, NH, and volunteered as their Business Manager. He was a Eucharistic Minister and served on the Pastoral Council, Finance Committee and Tithing Committee. He was also a member of the Knights of Columbus. Besides his loving wife Bernadette, his family includes three daughters and two son in laws; Lisa Olsen and her husband Ben of Nashua, Laura Gebing and her husband Emerson of Hudson, Shana Wickham of Nashua, five grandsons, Riley Olsen, Rory Olsen, Revin Olsen all of Nashua and Bryson Gebing and Cade Gebing both of Hudson.  Visiting hours will be held on Tuesday, August 28th from 4pm -7pm in the DUMONT-SULLIVAN FUNERAL HOME, 50 FERRY ST., IN HUDSON. A Mass of Christian Burial will be held on Wednesday, August 29th at 11am in St. Kathryn Parish, 4 Dracut Road in Hudson. All may meet at church. Burial in the NH State Veteran Cemetery in Boscawen, NH will take place at a later date. In lieu of flowers the family encourages donations be made in Rick’s loving memory to your charity of choice.

The family of Richard G. Wickham created this Life Tributes page to make it easy to share your memories.