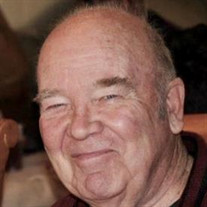 On December 23rd 2020 Richard Stone born in Lynn, MA and residing in Hudson, NH said his final good-bye. He leaves behind his loving wife of 65 years, Lola Stone. From the first day they met he was completely devoted to her, promising to marry her one day. A promise he kept. He spent his last days as he would have wanted, with Lola next to him. Anyone who knew Richard knows he was fiercely proud of his four children Deborah, Doug, Bruce and David. By extension of his love for them, he adopted their spouses Barry, Barbara, Debbie and Samantha as if they were his own. Richard is survived by his brother Bertram “Bud” and his cousin, Chuck, who he loved spending time with remembering their youth. They kept him young at heart even as the years passed. In his later years his greatest pleasure was seeing his grandchildren Heather, Dan, Mike, Sarah, Samantha, Rachel, Nicholas, Stephen, Derick and Johnathan and his great grandchildren William, Maya, Trent, Tori, Cecelia and Brody. Even just looking at pictures or sharing a story about one of them could put a huge smile on his face. Richard served his country as an Army Private First Class with the Second Infantry Division from 1957-1959. He spent most of his time in the service stationed in Alaska. Besides his family, Richard loved the simple pleasures of life. A warm day at the lake or a dip in the pool, a game of cribbage at the dining room table, chewy fudge, puttering in his well-manicured yard, and his career in the newspaper business. Richard worked as the night Forman in the Boston Herald mail room in the glory days of paper production where he and his crew were critical to connecting the community. They worked through troubling times like 9/11 and the passing of Rose Kennedy, and cherished helping Boston celebrate happy news including major sports wins. We will miss him terribly, but we will always remember the twinkle in his eyes that lit up a room whenever he spoke of his family. He loved strongly and we think he would agree that’s a life well lived. A Walk Through Visitation will be held on Monday, January 4th from 4:00pm - 6:00pm in the DUMONT-SULLIVAN FUNERAL HOME, 50 FERRY ST., IN HUDSON, NH. Those attending the services are asked to please wear a face mask or facial covering and to please follow the social distancing guidelines in place. In lieu of flowers the family encourages donations be made in Richard’s loving memory to the American Red Cross at www.redcross.org

On December 23rd 2020 Richard Stone born in Lynn, MA and residing in Hudson, NH said his final good-bye. He leaves behind his loving wife of 65 years, Lola Stone. From the first day they met he was completely devoted to her, promising to marry... View Obituary & Service Information

The family of Richard Stone created this Life Tributes page to make it easy to share your memories.