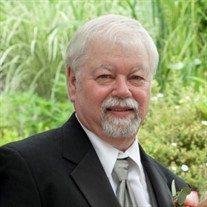 On Thursday, April 16, 2020, Richard S. Prince passed away peacefully at his home at the age of 68. Rick was born on October 23, 1951 in Nashua, NH to Lucille and Louis Prince. He was a true “momma’s boy.” He met the love of his life, Marie, in October 1986. In November 1995, they took the vows “through sickness and in health” and they kept true to those vows each and every day throughout Rick’s 20-year battle with Meningioma brain tumors. He endured a long and hard battle with brain cancer, but that battle does not define his life. Rick served in the U.S. Navy onboard the USS Severn and fought in the Vietnam war. He was a father of three; Scott Prince, Amanda Schoenberg, and Holly Condon, a brother to three; Roger Prince, Dave Prince, and Diane Brunelle, and a grandfather of six boys; Andrew, Brayden, Austin, Nolan, Zachary, and Alexander. Rick was an avid Patriots fan and enjoyed watching every game with a cold Coors light in hand. He loved the ocean and he lived on Plum Island and in Seabrook, NH for many years. Rick and Marie both owned Harley Davidson motorcycles and they enjoyed long rides with each other. He was part of the motorcycle group, Nam Knights, and truly enjoyed the camaraderie during those years. He will be remembered for his jolly laugh and his light-hearted banter. A Celebration of Life will be held at a later date. In lieu of flowers, the family asks for donations to Harborside Hospice: 23 Atkinson Depot Rd Suite 105, Plaistow, NH 03865. The family would like to thank Harborside for the warm and compassionate care that they gave to Rick and his family.

The family of Richard Prince created this Life Tributes page to make it easy to share your memories.