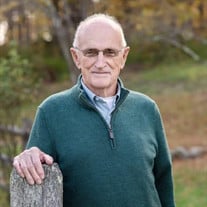 Richard “Dick” H. Phillips, 89, of Hudson, NH died on October 23, 2020 in his home surrounded by family, shortly after a diagnosis of metastatic cancer. Dick was born in Laconia, NH on April 18, 1931, the second child of Paul and Blanche Phillips. He graduated from Laconia High School, Class of 1950. After graduation, Dick joined the Air Force, trained to become a radar mechanic, and saw active duty in Anchorage, AK at Elmendorf Air Force Base. After completing his enlistment, Dick attended the University of New Hampshire’s School of Engineering. To earn money for college, he and his brother, Don, established the Paugus Bay Water Ski School on Lake Winnipesaukee. Dick also worked part time as a Laconia police officer. During the summer of his sophomore year, Don introduced him to Mae Allen of Epping, NH, who would become the love of his life. They were married on December 21, 1957. Dick graduated in 1959 with a degree in Electrical Engineering. Dick started his career as a Field Service Engineer for Hughes Aircraft Company in Los Angeles, CA. In 1965, he returned to New Hampshire with his family, joining Sanders Associates in Nashua, NH as an Electrical Engineer. Dick and his family lived outside of Heidelberg, Germany on a one-year assignment in 1972. He and Mae acquired a lifelong love of travel from this adventure, and shared it with their children. Dick remained at Sanders (now BAE Systems) until his retirement in 1996. Dick was happiest when he was doing something for someone else. He was a volunteer firefighter and EMT for the Town of Hudson, NH. He also volunteered for the National Ski Patrol. Throughout his life, kindness, generosity, and support of his family was at the center of his life. His beloved wife, Mae Allen Phillips, predeceased Dick in 1995. He leaves behind his three daughters, Kimberly Botan and her husband, Michael of Woodstock, VT, Kathy Whitaker and her husband, Andrew of Hollis NH, Kami Phillips and her husband, Jay Theberge of Gardner, MA, his son, Richard and his wife Christina Phillips of Hudson, NH, ten grandchildren and a great-grandson. Dick also leaves behind his brother, Donald Phillips and his wife Eleanor Mongovan of Meredith, NH and his sisters in law, Kay Casavant and her husband George, June Gangwer and her husband Jesse, Linda Allen, as well as his brothers in law, John Allen and his wife Marilyn, and Frank Allen, and many nieces and nephews. A private graveside service will be held at the Hills Farm Cemetery in Hudson. In lieu of flowers, contributions may be made to the Southeast Land Trust of New Hampshire - SELT.org (Protect Mount Molly) or to the American Red Cross at redcross.org

The family of Richard Phillips created this Life Tributes page to make it easy to share your memories.